September 8, 2016—(BRONX, NY)—In research published online Sept. 8 in Science, a team of scientists describe a new therapeutic strategy to target a hidden Achilles’ heel shared by all known types of Ebola virus. Two antibodies developed with this strategy blocked the invasion of human cells by all five ebolaviruses, and one of them protected mice exposed to lethal doses of Ebola Zaire and Sudan, the two most dangerous. The team included scientists from Albert Einstein College of Medicine, U.S. Army Medical Research Institute of Infectious Diseases (USAMRIID), Integrated Biotherapeutics, Vanderbilt University Medical Center, and The Scripps Research Institute.

Ebola viruses cause a highly fatal disease for which no approved vaccines or treatments are available. About two dozen Ebola outbreaks have been documented since 1976, when infections first occurred in villages along the Ebola River in Africa. The largest outbreak in history—the 2014-2015 Western Africa epidemic—caused more than 11,000 deaths and infected approximately 29,000 people.

Jonathan R. Lai, PhDPhoto courtesy of Albert Einstein College of MedicineMonoclonal antibodies, which bind to and neutralize specific pathogens and toxins, have emerged as the most promising treatments for Ebola patients. A critical problem, however, is that most antibody therapies target only one specific ebolavirus. For example, the most promising experimental therapy—ZMappTM, a cocktail of three monoclonal antibodies—is specific for Ebola virus Zaire, and doesn’t work against the other two viruses (Sudan and Bundibugyo), which have both caused major outbreaks. The broad-spectrum antibodies developed by the research team represent an important advance against one of the world’s most dangerous pathogens.

“It’s impossible to predict where the next ebolavirus outbreak will occur or which virus will cause it,” said co-senior author Jonathan R. Lai, PhD, associate professor of biochemistry at Einstein. “So the best therapy would be a monoclonal antibody that is active against the glycoproteins of all five ebolaviruses—and until our study, no such antibody had demonstrated the ability to do that. We hope that further testing will establish our antibodies as safe and effective for treating those exposed to any ebolavirus.”

Kartik Chandran, PhDPhoto courtesy of Albert Einstein College of MedicineIn 2011, a team that included co-senior authors Kartik Chandran, PhD, professor of microbiology & immunology at Einstein, and John M. Dye, PhD, chief of viral immunology at USAMRIID, discovered that all filoviruses (the family to which ebolaviruses and the more distantly related Marburg virus belong) have an Achilles’ heel: To infect and multiply in human cells, they must all bind to a host-cell protein called Niemann-Pick C1 (NPC1).

But capitalizing on that knowledge required a completely new approach to targeting viruses: exploiting the fact that Ebola and many other viruses must enter host cell compartments called lysosomes. Once safely inside the lysosomes, the viruses transform and expose key portions of their exterior that the research team successfully targeted using monoclonal antibodies.

To gain entry to cells, filoviruses bind to the host cell’s outer membrane via glycoproteins (proteins to which carbohydrate chains are attached) that bristle from the virus’s surface. (See illustration.) A portion of the cell membrane then surrounds the virus and pinches off, eventually developing into a lysosome—a membrane-bound, intracellular compartment filled with enzymes to digest foreign and cellular components.

Filoviruses then use the host cells’ resources to break out of their lysosomal “prisons” so they can enter the host cell’s cytoplasm to multiply. Enzymes in the lysosome slice a “cap” from the virus’s glycoproteins, unveiling a site that binds to the NPC1 embedded in the lysosome membrane. NPC1, which normally helps transport cholesterol within the cell, offers Ebola virus its only means of escaping the lysosome and multiplying. By fitting its protein “key” into the NPC1 “lock,” the virus fuses itself to the lysosome membrane. (See illustration close-up.) Now the virus can propel its RNA from the lysosome and into the cell’s cytoplasm, where it can finally replicate itself. 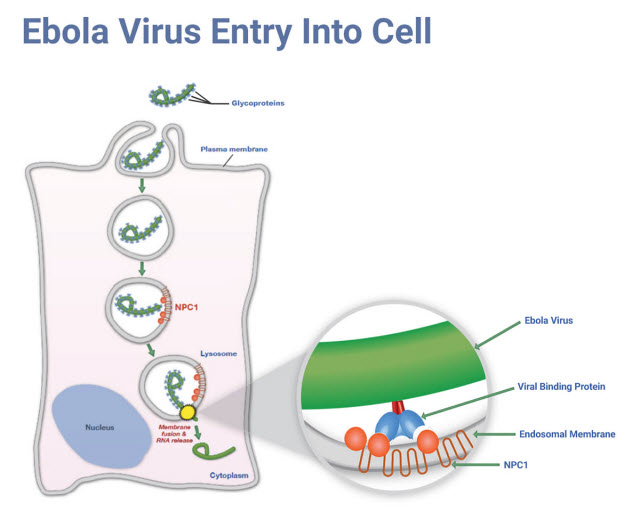 The research team realized that monoclonal antibodies could potentially thwart all filovirus infections by neutralizing the viral protein that binds to NPC1, or by neutralizing NPC1 itself. There was just one problem: Reflecting Ebola’s ingenuity, both targets reside only in lysosomes deep within cells—making them invisible to the immune system and shielded from attack by conventional antibodies.

Co-senior authors Drs. Chandran, Dye and Lai—an expert in engineering antibodies—devised a clever “Trojan horse” strategy for overcoming the virus’s invisibility cloak: Just as the citizens of Troy unwittingly pulled a wooden horse filled with Greek soldiers into their walled city, the researchers tricked the viruses into carrying the means of their own destruction along with them into host cells.

To do so, the research team synthesized two types of “bispecific” antibodies, each consisting of two monoclonal antibodies combined into one molecule. One bispecific antibody was devised to neutralize the viral protein that binds to NPC1, the other to target NPC1. Both had one monoclonal antibody in common: antibody FVM09, which binds to the surface glycoproteins of all ebolaviruses while the virus is outside cells, allowing the bispecific antibodies to hitch a ride with the virus into the lysosome. FVM09 was developed by co-senior author M. Javad Aman, Ph.D. at Integrated Biotherapeutics.

One bispecific antibody combined FVM09 with antibody MR72, which was isolated from a human survivor of Marburg virus infection by co-senior author James E. Crowe Jr., M.D., at Vanderbilt University Medical Center. MR72 targets the NPC1-binding viral protein that is unveiled by all filoviruses in lysosomes. The second bispecific antibody links FVM09 to antibody mAb-548, developed at Einstein, which zeroes in on NPC1. With one bispecific antibody targeting the “lock” (NPC1) and the other targeting the “key” (the virus’s NPC1-binding protein), both had the potential for preventing Ebola virus from interacting with NPC1 and escaping from the lysosome into the cytoplasm.

Putting Antibodies to the Test

Next came studies at USAMRIID to test whether the two bispecific antibodies could protect mice infected with the two most dangerous ebolaviruses, Zaire and Sudan. Researchers, led by Dr. Dye, administered the bispecific antibodies two days after mice were exposed to a lethal dose of virus. 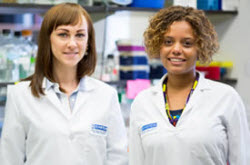 Co-first authors Anna Wec, MS, Elisabeth Nyakatura, PhD.Photo courtesy of Albert Einstein College of MedicineThe bispecific antibody that targeted the viral binding protein provided good protection to mice exposed to both viruses. As expected, the bispecific antibody that targeted NPC1 did not protect mice. It was designed to bind specifically to human NPC1, which differs slightly in structure from the NPC1 protein found in mice.

“We would love to extend this approach to Ebola’s distant cousin, Marburg virus, to create a true pan-filovirus therapeutic antibody,” said Dr. Chandran. “Furthermore, we hope that our 'Trojan horse' antibody strategy of targeting viruses in lysosomes might work against other disease-causing viruses like flu, dengue, or Lassa, which, like Ebola, also enter host-cell lysosomes as part of their life cycles.”

As a next step, both bispecific antibodies will need to be tested in nonhuman primates, the current gold standard for anti-Ebola therapeutics.