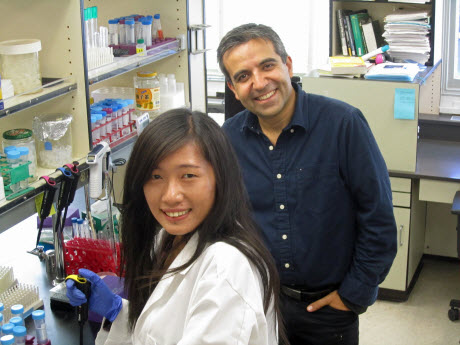 University of Utah physics doctoral student Xiaolin Tang and virologist Saveez Saffarian in the lab where they identified an exotic mechanism that may explain how a group of viruses that includes Ebola replicate or make copies of themselves to make people sick.Lee J. Siegel, University of UtahDec. 11, 2014 – University of Utah researchers ran biochemical analysis and computer simulations of a livestock virus to discover a likely and exotic mechanism to explain the replication of related viruses such as Ebola, measles and rabies. The mechanism may be a possible target for new treatments within a decade.

“This is fundamental science. It creates new targets for potential antiviral drugs in the next five to 10 years, but unfortunately would not have an impact on the current Ebola epidemic” in West Africa, says Saveez Saffarian, senior author of a new study published today by the Public Library of Science journal PLOS Computational Biology.

Saffarian, a virologist and assistant professor of physics and astronomy, and his colleagues studied a horse, cattle and pig virus named VSV – vesicular stomatitis virus – which is a member of family called NNS RNA viruses. That family also includes closely related viruses responsible for Ebola, measles, rabies and the common, childhood respiratory syncytial virus, or RSV. The genetic blueprint in these viruses is an RNA strand that is covered by protein like beads on a necklace.

By conducting 20,000 computer simulations of the VSV starting to replicate in different possible ways, the study found a “fundamental mechanism” used by VSV and related viruses like Ebola to make copies of themselves or replicate, Saffarian says.

The mechanism: Once the virus infects a cell, enzymes called polymerases literally slide along the protein “bead”-covered viral RNA strand until they reach the correct end of the strand. Then the polymerases can read and “transcribe” the RNA code to synthesize messenger RNA, or mRNA. Once one polymerase starts doing that, it collides with other sliding polymerases, kicking them loose within the cell until they, too, attach to the correct end of the RNA and start making copies. That lets the virus replicate and take over the infected host cell.

“The proposed sliding mechanism is a fundamental new mechanism specific to the NNS RNA viruses that can be a target for antiviral drugs in the future,” Saffarian says – something he hopes pharmaceutical scientists will pursue.

The sliding contrasts with replication in many other viruses, in which the polymerases easily detach from the virus inside an infected cell and then find the right end of the RNA so replication begins.

The mechanism was discovered by computer simulations, so “we are working now on demonstrating evidence of the sliding mechanism in VSV,” Saffarian says.

He believes the discovery is “as fundamental as understanding the workings of HIV protease” – an enzyme essential for replication of the AIDS virus and that became a target of protease inhibitors, which first made it possible for AIDS patients to live with AIDS as a chronic rather than deadly disease.

Why Antivirals Could Be Better than Vaccines 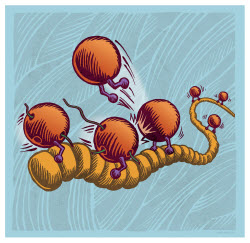 This illustration depicts an exotic mechanism by which a family of viruses named NNS RNA viruses may replicate to make copies of themselves, according to a University of Utah study. The family includes a livestock virus named VSV as well as viruses responsible for Ebola, measles, rabies and a common respiratory virus, RSV. The mechanism may serve as a target for new drugs against Ebola in five to 10 years. The yellowish strand is a viral genetic blueprint made of RNA and covered by bead-like proteins. The orange, ball-shaped objects are enzymes called polymerases, which normally read and copy the RNA to make new virus particles. That process can begin only when some polymerases attach to the correct end of the RNA and start reading it, which the two polymerases on the left are doing. The other polymerases (the four on the right side) are attached to the protein-covered RNA but slide along it until they collide with the polymerases that already are reading the RNA. Those collisions kick sliding polymerases loose (top center) so they can float to the proper end of the RNA and start reading it. Researchers hope future drugs can be developed to target this sliding mechanism as a new treatment for Ebola.Dave Meikle, University of UtahMany viruses have their genome or genetic blueprint hidden within an envelope of fat or lipid. The only parts of the virus that are exposed are some envelope proteins, and about 10 percent of those proteins are used by the virus to play a direct role in entering and infecting a target cell. Antibodies in vaccines target the proteins to attack and block viral infection.

Some viruses, known as RNA viruses, have genetic blueprints made of RNA instead of DNA. Creating vaccines is particularly difficult for many RNA viruses – which include HIV, influenza and the group with VSV and Ebola – because RNA viruses are adept at mutating and changing their envelope proteins to evade vaccines, Saffarian says, adding that the Ebola virus now in Africa “is mutating extremely fast.”

So while promising vaccines candidates against Ebola now are being developed, Saffarian says, “Vaccines are not the most potent way to fight these RNA viruses.”

“The only way to create stable antiviral therapies against RNA viruses is to target multiple sites within the replication machinery,” he adds.

The Mystery of Ebola Replication

Some RNA viruses are known as “nonsegmented negative sense” or NNS RNA viruses, including Ebola, rabies, measles, the VSV livestock virus and RSV.

“The replication machinery of the Ebola virus is not fully understood because it has not been possible to reconstitute replication of Ebola in the lab,” Saffarian says. “It’s biochemically difficult. But the fundamental mechanism of replication has been shown to be almost identical to a well-studied animal virus, VSV,” which infects and causes bleeding mouth and udder ulcers in cattle, horses and pigs.

When an NNS RNA virus infects a cell, its RNA genetic blueprint enters the cell along with a set of polymerases, which are enzymes essential for a virus to replicate. Polymerases normally “read” the RNA genetic blueprint to synthesize mRNA, which then leads to formation of viral proteins and viral replication: more viral particles.

But in the NNS RNA viruses, the RNA strand is covered by bead-like proteins, preventing polymerases from reading the RNA and starting the replication process. Yet the viral polymerases somehow evolved to read, transcribe and replicate the RNA genome hidden beneath the protein beads.

What the Study Found

Researchers previously thought viral polymerases worked similar to the polymerases inside our cells, which move freely inside the cell and find the proper end of DNA to begin replication.

But in an initial phase of the study conducted with real VSV, the livestock virus, Bendjennat showed the polymerases attached to the bead-covered RNA of the livestock virus VSV were so tightly bound they could not float off into the cell to find the correct end of the RNA to start reading it.

“Our team was puzzled by, how do these polymerases find where they are supposed to start working if they are stuck to the beads on the RNA so tightly most can’t even come off?” Saffarian says.

So Tang used computer simulation to test 20,000 different conditions that could possibly occur as the livestock virus RNA was read and transcribed into mRNA in the first steps of viral replication. The simulations were based on current knowledge of how much work polymerases do during the first hour after VSV infects a cell, and that each virus carries about 50 identical polymerase molecules to use for reading and copying the virus’ RNA into mRNA. Tang looked for the mechanism – a set of conditions – that best fit the speed of a real VSV infection.

Tang “found that no matter what she tried, these viral polymerases have to be able to slide on their bead-covered RNA genomes rather fast in order to get any meaningful work done” toward replication, Saffarian says. “They can’t dissociate [separate from the RNA], but they can slide. That helps the polymerases find where they have to start work at the end of the RNA.”

The study also indicates that as a polymerase reads and transcribes the beaded RNA strand, it collides with sliding polymerases and kicks them into solution inside the cell, which allows them to eventually bind to the correct end of the RNA, where they also starts transcribing it to mRNA for replication.