(Grand Rapids, Mich.)—A team spearheaded by Van Andel Research Institute scientists has answered a long-standing question that may lead to more effective drugs with fewer side effects for diseases ranging from heart failure to cancer.

The findings, published July 27 in Cell, reveal for the first time components of a G protein–coupled receptor (GPCR) named rhodopsin bound to a signaling molecule called arrestin, both crucial pieces of the body’s intricate cellular communication network. The new discovery further refines a landmark 2015 Nature article that first described the structure of the two molecules in complex together. 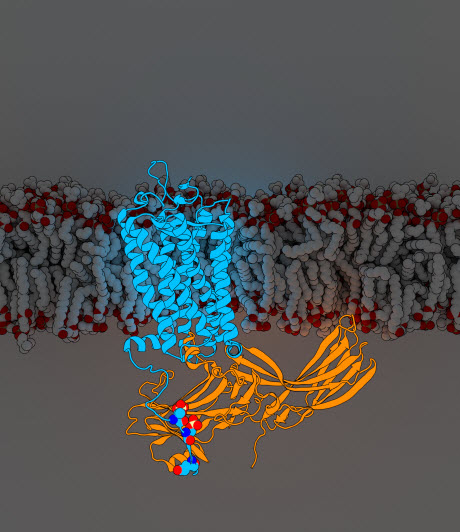 Rhodopsin-arrestinImage Courtesy of Parker de Waal, Xu Laboratory, Van Andel Research Institute“Our revised structure is like a roadmap with additional details and geographic features filled in,” said VARI professor H. Eric Xu, PhD, the lead author of the new study as well as the 2015 article. “For years, the field has sought to answer exactly how arrestins interact with GPCRs. We hope the answer provided by our work, in the context of rhodopsin, will fuel new research and the design of better medications, to the ultimate benefit of patients around the world.”

GPCRs are the largest group of cell surface receptors, and act as information clearinghouses by linking up with either arrestins or other signaling molecules called G proteins to relay critical instructions for countless biological functions, including growth and hormone regulation. These characteristics, coupled with their location on the surface of the cell, make them attractive targets for drug therapy. An estimated 30 percent of all medications currently on the market target GPCRs.

“Since arrestins and G proteins mediate different cellular responses, developing drugs that activate only one of these two pathways may produce fewer side-effects for patients,” said Karsten Melcher, PhD, a senior author on the paper and associate professor at VARI. “The insight provided by our expanded structure could go a long way in guiding the design of these therapies.”

To determine their augmented structure, Xu Lab Senior Research Scientist Edward Zhou, PhD, reanalyzed more than 22,000 individual images collected for the original 2015 study using a new version of CrystFEL software not available at the time. It revealed three previously hidden molecular components called phosphoryl groups on rhodopsin and three corresponding pockets on arrestin that act as docking stations. The specific arrangement of these phosphoryl groups—known as phosphorylation codes—are required for rhodopsin to bind to arrestin, much like the combination to a safe. Once complete, this interaction initiates one branch of a complex cellular communication network that regulates functions throughout the body.

“The big question then became, ‘If this is happening with rhodopsin and arrestin, does it happen in all GPCRs?’” said Parker de Waal, a Van Andel Institute Graduate School student and member of Xu’s lab. “Our results indicate that these codes—these specific sequences of phosphoryl groups—are found in whole or in part in most GPCRs. The findings help elegantly address a longstanding question within our field; why certain GPCRs bind arrestins better than others can now be explained by the existence of phosphorylation codes.”

A tool to explore the prevalence of these codes across annotated GPCR data didn’t exist, so de Waal created one. Part web GUI and part Python-based command line tool, PhosCoFinder allowed the team to rapidly search through the total set of all known GPCRs and predict potential phosphorylation codes.

As expected, more than half of the 825 GPCRs scanned by PhosCoFinder were found to contain phosphorylation codes within their C-terminal tail, a part of the GPCR that helps transfer information from the cell’s environment to the inside of the cell. Most of the remaining GPCRs also were found to have codes; however, they were located in areas other than their C-terminal tails, possibly affecting the way they bind to arrestins.

The next steps, Xu says, are to investigate whether these findings hold true across all GPCRs and other cell surface proteins that interact with arrestin.

“With biology, there’s always more than one way of doing things,” Xu said. “We want to follow those other avenues too in the hope that they help us further understand these critical mechanisms.”

PhosCoFinder is available to the scientific community by visiting http://tools.vai.org/phoscofinder.