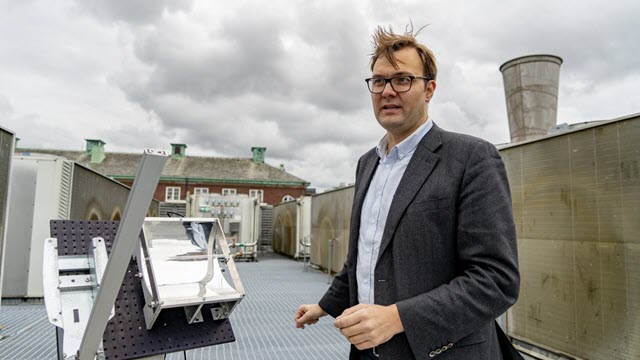 A research group from Chalmers University of Technology, Sweden, has made great, rapid strides toward the development of a specially designed molecule that can store solar energy for later use. These advances have been presented in four scientific articles this year, with the most recent being published in the highly ranked journal Energy & Environmental Science.

Around a year ago, the research team presented a molecule that was capable of storing solar energy. The molecule, made from carbon, hydrogen, and nitrogen, has the unique property that when it is hit by sunlight, it is transformed into an energy-rich isomer—a molecule that consists of the same atoms, but bound together in a different way.

This isomer can then be stored for use when that energy is later needed—for example, at night or in winter. It is in a liquid form and is adapted for use in a solar energy system, which the researchers have named MOST (Molecular Solar Thermal Energy Storage). In just the last year, the research team has made great advances in the development of MOST.

"The energy in this isomer can now be stored for up to 18 years. And when we come to extract the energy and use it, we get a warmth increase which is greater than we dared hope for," says the leader of the research team, Kasper Moth-Poulsen, professor at the Department of Chemistry and Chemical Engineering.

The research group has developed a catalyst for controlling the release of the stored energy. The catalyst acts as a filter, through which the liquid flows, creating a reaction that warms the liquid by 63 degrees Celsius. If the liquid has a temperature of 20C when it pumps through the filter, it comes out the other side at 83C. At the same time, it returns the molecule to its original form, so that it can be then reused in the warming system.

During the same period, the researchers also learned to improve the design of the molecule to increase its storage abilities so that the isomer can store energy for up to 18 years. This was a crucial improvement, as the focus of the project is primarily chemical energy storage.

Furthermore, the system was previously reliant on the liquid being partly composed of the flammable chemical toluene. But now the researchers have found a way to remove the potentially dangerous toluene and instead use just the energy storing molecule.

Taken together, the advances mean that the energy system MOST now works in a circular manner. First, the liquid captures energy from sunlight, in a solar thermal collector on the roof of a building. Then it is stored at room temperature, leading to minimal energy losses. When the energy is needed, it can be drawn through the catalyst so that the liquid heats up. It is envisioned that this warmth can then be utilized in, for example, domestic heating systems, after which the liquid can be sent back up to the roof to collect more energy—all completely free of emissions, and without damaging the molecule.

"We have made many crucial advances recently, and today we have an emissions-free energy system which works all year around," says Kasper Moth-Poulsen.

The solar thermal collector is a concave reflector with a pipe in the centre. It tracks the sun's path across the sky and works in the same way as a satellite dish, focusing the sun's rays to a point where the liquid leads through the pipe. It is even possible to add on an additional pipe with normal water to combine the system with conventional water heating.

The next steps for the researchers are to combine everything together into a coherent system.

"There is a lot left to do. We have just got the system to work. Now we need to ensure everything is optimally designed," says Kasper Moth-Poulsen.

The group is satisfied with the storage capabilities, but more energy could be extracted, Kasper believes. He hopes that the research group will shortly achieve a temperature increase of at least 110 degrees Celsius and thinks the technology could be in commercial use within 10 years.