Prehistoric people may well have had an emotional bond with domesticated dogs much earlier than we thought. Leiden University PhD candidate and vet Luc Janssens discovered that a dog found at the start of the last century in a grave dating back 14,000 years had been sick for a long time and had been cared for. 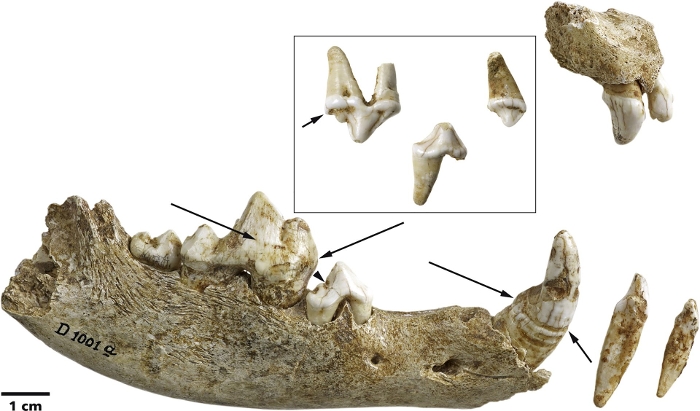 The teeth of the younger dog from the grave, with traces of the morbilli virus (canine distemper).Photo Source: Pütz Martin, Jürgen Vogel, Ralf Schmitz (LVR-LandesMuseum Bonn)

Humans and dogs in shared grave

The grave itself, including the remains of a man, a woman, and two dogs, was discovered by chance in 1914 by a group of workers not far from Bonn. Recent research shows that the remains date from the Paleolithic era, making them 14,000 years old. This is the oldest known grave where humans and dogs were buried together, and it is among the earliest evidence of the domestication of dogs. It now appears that not only were the dogs domesticated, they were probably also intensively cared for.

The younger dog in the grave must have been 27 or 28 weeks old when it died. Luc Janssens examined the remains of the animal's teeth. Based on his findings, he concluded that the dog was probably suffering from a serious infection of the morbilli virus (also known as canine distemper). It is not possible to make a definitive diagnosis because the genetic material of the virus has perished. The characteristic damage to the dog's teeth leads Janssens to believe that the animal contracted the illness as a puppy (at around 3 to 4 months). After this the dog may have had two or possibly even three periods of serious illness lasting 5 to 6 weeks.

‘Without adequate care, a dog with a serious case of distemper will die in less than three weeks,' Janssens explains. This dog was clearly seriously ill but it survived a further eight weeks, which would only be possible if it had been well cared for. ‘That would mean keeping it warm and clean and giving it food and water, even though, while it was sick, the dog would not have been of any practical use as a working animal. This, together with the fact that the dogs were buried with people who we may assume were their owners, suggests that there was a unique relationship of care between humans and dogs as long as 14,000 years ago.'

The article by Luc Janssens, entitled ‘A new look at an old dog: Bonn-Oberkassel reconsidered’ was published in the Journal of Archaeological Science.