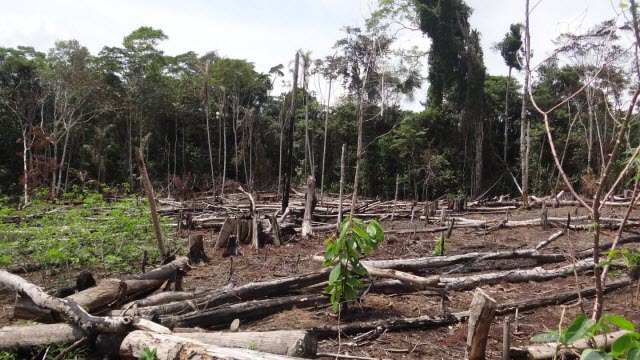 This is a tropical rainforest clearcut in Puerto Nariño, Colombia. If Colombia doesn't take protective action, deforestation could get worse with the end of a decades-long conflict.image credit: María Elena Gutiérrez Lagoueyte at Universidad EIA

More than 50 years of internal conflict in Colombia have left behind roughly 8 million victims, including 220,000 dead. Now the country is in the midst of a tenuous ceasefire, thanks to a November 2016 peace treaty between the Colombian government and the largest group of rebels, formerly known as Fuerzas Armadas Revolucionarias de Colombia (FARC). The second largest group of guerrillas, the Ejército de Liberación Nacional (ELN), is also interested in putting an end to the fighting. As a result, Colombia's 2018 elections were its most peaceful in decades.

If the peace holds, the end of the decades-long conflict would promise many political and socio-economic benefits for the South American nation. Unfortunately, the conflict's end may also create new threats to the natural environment according to a paper, led by Alejandro Salazar from Purdue University, published today in Frontiers in Ecology and the Environment (FiEE).

"The peace agreement is of course good for the country," says co-author Daniel Ruiz Carrascal, an adjunct researcher at Columbia University's International Research Institute for Climate and Society and associate professor at EIA University in Colombia. "But in the aftermath of this conflict, we expect to see an increase in the degradation of pristine environments."

Governments tend to focus on social and economic growth after a war ends, while environmental protections fall by the wayside. In their paper, Ruiz-Carrascal and his colleagues from many institutions outline the threats to Colombia's ecosystems, and suggest ways to avoid the worst of the damage.

"The decisions made at this crucial moment in time will likely reverberate through the lives of present and future Colombian generations," they write, "and have ecological, climatic and biogeochemical consequences with global implications."

Colombia is the world's second most biodiverse country. Its terrain--which varies from Amazonian rainforests to cloud forests, open savannas, and mountainous terrain in the Andes--supports about 10 percent of all the planet's species, including hundreds of animals that are found nowhere else on Earth.

In some areas, the conflict unintentionally preserved habitats for the 51,000 different types of plants and animals in Colombia. Because FARC tended to inhabit rural and forested areas, it drove a mass migration to the cities. As a result, large forested areas remained unharmed during the armed conflict. The forests thrived, and even reconquered abandoned farmlands.

Now, somewhat paradoxically, the more stable socio-political conditions that could come along with peace are putting those untouched environments at risk. The threats could come in three forms:

Deforestation isn't a new problem for Colombia. The country loses more than 2,300 square kilometers (888 square miles) of forest per year to rangeland, farmland, mining operations, and more. Forest loss may even be getting worse since the signing of the peace agreement.

"Sadly, we've seen a significant increase in the deforestation rates of pristine, remote areas that used to be controlled by the FARC rebels," says Ruiz-Carrascal. Colombia's forest loss rates are even starting to surpass those of Brazil, previously the record-holder in South America, he says. "It's starting to affect places that have the highest biodiversity levels in Colombia."

While no area of the planet will be left untouched by climate change, mountain ecosystems are particularly vulnerable to rising global temperatures.

High up in the Andes, Colombia's glaciers are shrinking. This could put drinking water supplies in jeopardy for communities in the mountains and the foothills. Rising temperatures also spell trouble for isolated mountain ecosystems, forcing Andean species to move higher and higher up the mountains in pursuit of cold conditions. Eventually, they'll have nowhere left to go.

"Colombia has many endemic species that cannot be found elsewhere in the world," says Ruiz-Carrascal. "If they disappear, they could become extinct."

Colombia is already witnessing a significant increase in temperatures, and its future looks hotter and drier. By the 2050s, the average temperatures could increase by 3 to 4 degrees Celsius. At the same time, climate models predict precipitation will decline in some areas. This could impair crop productivity and the ecosystem's capacity to store carbon, as well as injure Colombia's natural ecosystems.

Mining--for minerals such as gold and emeralds--is an important driver of the Colombian economy, and it's expected to continue growing in the future.

With mining can come a slew of environmental problems. Forests may be clear cut to make way for mining equipment and roads, and mountains leveled. Illegal mining activities convert drinking water into sulfuric acid and cyanide-contaminated runoff. They leave behind massive piles of waste rock, and tailings that can leak mercury and other toxic metals into the environment.

"On top of deforestation rates that are surpassing what has been taking place in Latin America, you have global warming, and you have these titles that allow the mining companies to explore and exploit our natural resources," says Ruiz-Carrascal. "It's going to be a very critical issue in the decades to come."

Colombia's biodiversity provides food, timber, and medicine for the local people. It draws in tourists, and helps to moderate the water supply and absorb carbon. Through a number of international policies, Colombia has committed to protecting this biodiversity and slashing carbon emissions. By 2020, the country hopes to achieve a net deforestation rate of zero, with new seedlings replacing trees that get chopped down. By 2030, Colombia aims to cut its carbon emissions to 20 percent below the business-as-usual projections. Whether it meets these goals will depend on how rural areas are developed, managed, and conserved, the authors write.

To help protect biodiversity, Ruiz-Carrascal and his colleagues suggest the government could prioritize development in non-forested regions. These areas already cover half of the country.

The group also calls for more extensive and continuous monitoring of the climate, water levels, species distribution, and more. Several institutions and organizations are already collecting this type of data independently. Ruiz-Carrascal and his colleagues are launching a network called PEACE, the Plataforma de Estudios y Análisis sobre Colombia y sus Ecosistemas (Platform for Studies and Analysis of Colombia and its Ecosystems), to share monitoring information across institutions. They will combine satellite information with on-the-ground data, and use remote sensing technologies in difficult-to-reach places to track how ecosystems are responding to climate and land-use changes. So far, a few local branches of the Colombian government--including the Alexander von Humboldt Biological Resources Research Institute--have signed on, as have researchers in other nations, including the Max Planck Institute for Biogeochemistry in Germany.

At the same time, the FiEE paper also calls on scientists to engage more with policymakers, victims of the conflict, and even former FARC rebels. "We need to sit with these people and show them what we know. We need to show them the basic science behind climate change, the basic science behind deforestation," says Ruiz-Carrascal. With more information, he reasons, people and policymakers will be better equipped to make decisions that help to avoid negative environmental impacts.

Colombia faces many challenges going forward. But these challenges also present an opportunity to shift to a more green economy. Sustainable development that preserves biodiversity would also help to protect Colombians against drought and flood, and to secure food and energy into the future.

With improved monitoring, science-based decision-making, climate policy implementation, and natural resource protection, "this peace transition could not only improve the quality of life for millions of people," the authors write, "but serve as a historic example of how a society can end a war without endangering its own environment and ecosystems."