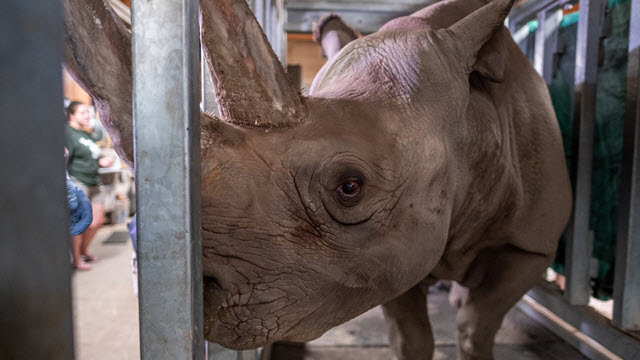 Newswise — EAST LANSING, MI — For the first time, there’s a pregnant black rhino at the Potter Park Zoo in Lansing, Michigan and Michigan State University veterinarians are part of the team bringing her to term. Vets and students from MSU’s College of Veterinary Medicine and Veterinary Medical Center are working alongside the zoo staff to monitor the pregnancy, as well as learn from and plan for delivery.

Doppsee, the first-time expectant rhino mother, is due in late December or early January 2020 after her 15-month pregnancy.

She arrived at Potter Park Zoo in 2011 and has since been an active participant in the Species Survival Plan, which works to ensure engendered species living in zoos and aquariums survive. Since her arrival, the zoo has received recommendations from fellow members of the Association of Zoos and Aquariums, or AZA, who have helped their own rhinos through pregnancies.

“The AZA is doing great work for black rhino conservation,” said Ronan Eustace, director of animal health for Potter Park Zoo. “Conservation is a priority for AZA-accredited zoos, and a key part of their missions. Potter Park Zoo is honored to be a part of that work.

Doppsee’s pregnancy isn’t significant just because of black rhinos’ status as critically endangered; she has very valuable genetics in the captive population of eastern black rhinos. The more these genetics spread, the greater chance there is of preserving the global black rhino species.

This is also the first opportunity MSU veterinarians and veterinary students have had to play an active role in aiding rhino preservation, as well as learning about how to help future pregnancies be successful.

“Before breeding between Phineus and Doppsee even began, zoo staff and the veterinarians worked diligently to make sure it would be safe for all animals and people involved,” says Cynthia Wagner, director of Potter Park Zoo and MSU alumna. “The zoo community as a whole has been working together to understand the breeding and reproduction process of rhinos. Potter Park Zoo is very fortunate to foster an environment where we could introduce, monitor, and mate Doppsee and Phineus.”

Physical signs of rhino pregnancies aren’t always visible right away, so zookeepers were uncertain if Doppsee was indeed pregnant until Eustace, and two College of Veterinary Medicine faculty—Julie Strachota, clinical instructor for the Department of Large Animal Clinical Sciences and resident for the Large Animal Theriogenology Service, and Carla Carleton, professor emeritus for the Department of Large Animal Clinical Sciences—confirmed pregnancy through multiple ultrasound evaluations.

"Collaborating with Potter Park Zoo is a wonderful educational experience, not only for our veterinarians, but for our veterinary medical students,” said Strachota. “I never would have expected that I would be doing transrectal and transabdominal ultrasounds on a black rhino as part of my training to become a theriogenologist.”

“Dr. Eustace always welcomes us to bring as many students as we can to work with the animals at Potter Park Zoo,” Strachota said. “During one of our ultrasound examinations, one of the senior students that I took to see Doppsee commented that it was ‘the best day of veterinary school.’ What Potter Park Zoo is doing for our veterinary curriculum is invaluable.”

Beyond the significance to conserving black rhinos, Doppsee’s personality and attitude are very rare, Eustace explained.

“She isn’t like most rhinos. Just by using her favorite foods and treats, we’ve been able to train Doppsee for abdominal and rectal ultrasounds, blood draws and exams,” Eustace said.

For example, in order for Eustace, Carleton, and Strachota to ultrasound Doppsee, she must enter a chute; when she enters, the back door closes and the front door remains open, allowing the veterinarians and zookeepers to safely work behind her, as well as allowing Doppsee to exit the chute whenever she pleases. But, Doppsee rarely leaves the chute when she’s being examined.

The team said that Doppsee’s cooperativeness and good-nature shows that her participation is always voluntary—and underscores the importance of positive reinforcement to train her.

“Through Doppsee’s excellent attitude and the patience and diligence of zoo staff, veterinarians, and veterinary students, we’ve been able to provide Doppsee with intimate care, which only benefits her and her unborn calf,” Eustace said. “We couldn’t be prouder of Doppsee, or of our relationship with MSU.”

Veterinarians and zookeepers continue to monitor Doppsee and her fetus weekly, always providing opportunities for veterinary students from MSU to practice their physical exam, blood draw, and ultrasound skills on Doppsee. And most importantly, ensuring that she and her baby calf are safe, happy, and healthy.

For more than 40 years, the College has been partnered with Potter Park Zoo on the shared mission to provide excellent animal welfare to wildlife and exotic animals at zoos, preserve our ecosystem, and train the next generation of veterinarians.