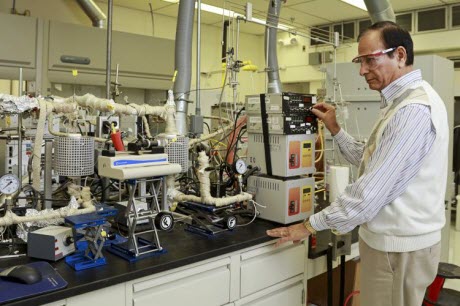 Chaitanya Narula led analysis of an ORNL biofuel-to-hydrocarbon conversion technology to explain the underlying process.Photo courtesy of Oak Ridge National LaboratoryOAK RIDGE, Tenn., Nov. 3, 2015—A new study from the Department of Energy’s Oak Ridge National Laboratory explains the mechanism behind a technology that converts bio-based ethanol into hydrocarbon blend-stocks for use as fossil fuel alternatives.

Scientists have experimented for decades with a class of catalysts known as zeolites that transform alcohols such as ethanol into higher-grade hydrocarbons. As ORNL researchers were developing a new type of zeolite-based conversion technology, they found the underlying reaction unfolds in a different manner than previously thought.

“For 40 years, everyone thought that these reactions must go first from ethanol to ethylene, and then from there it forms longer chains. We were able to show that it’s not how this occurs,” said ORNL’s Brian Davison, coauthor on the study published in Nature Scientific Reports.

The researchers’ analysis found that this energy-consuming intermediary step is not necessary for the conversion to happen. Instead, an energy-producing “hydrocarbon pool” mechanism allows the zeolite catalysts to directly produce longer hydrocarbon chains from the original alcohols.

“It challenges a long-held but incorrect assumption,” said ORNL coauthor Chaitanya Narula. “It has been assumed that you must go from ethanol to ethylene, which is endothermic and requires energy. We showed this step doesn’t occur, and that the overall reaction is slightly exothermic.”

ORNL researchers tracked the molecular transition in labeling experiments with deuterium, a hydrogen isotope, to confirm the hydrocarbon pool mechanism.

The research, supported by DOE’s BioEnergy Technologies Office, has implications for the energy efficiency and cost of catalytic upgrading technologies proposed for use in bio-refineries. Uncovering the mechanism behind the reaction helps support the potential economic viability of ORNL’s direct biofuel-to-hydrocarbon conversion approach.

“Our method of direct conversion of ethanol offers a pathway to produce suitable hydrocarbon blend-stock that may be blended at a refinery to yield fuels such as gasoline, diesel and jet fuel or commodity chemicals,” Narula said.

The ORNL-developed catalyst and conversion process were licensed in 2014 to Vertimass, a startup company based in Irvine, CA. ORNL researchers are working with Vertimass through a separate DOE-funded project to scale the technology to the commercial level.

The study was supported by the BioEnergy Technologies Office in DOE’s Office of Energy Efficiency and Renewable Energy. Initial funding came from ORNL’s Laboratory Directed Research and Development program and DOE’s BioEnergy Science Center, which is supported by the Office of Biological and Environmental Research in DOE’s Office of Science. The project used resources at ORNL’s Center for Nanophase Materials Sciences, a DOE Office of Science User Facility. The zeolite materials were originally developed with support from DOE’s Office of Energy Efficiency and Renewable Energy.