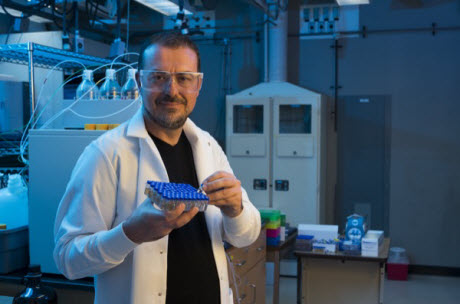 Dion Vlachos has published a paper in Nature Communications showing that a patched architecture may yield more effective catalysts than a traditional core-shell structure.Photo credit: Kathy F. AtkinsonRecent efforts have focused on combining two metals, often in a structure where a core of one metal is surrounded by an atom-thick layer of a second one.

The properties and performance of these so-called bimetallic core-shell catalysts can be superior to those of either of the constituent metals, but determining how to take advantage of this synergy can be challenging.

Dion Vlachos, who directs the Catalysis Center for Energy Innovation at the University of Delaware, uses computational techniques to predict how these nanoscale materials will behave, and he recently made a surprising discovery about the structure of bimetallic catalysts.

“We thought that the shell had to form a perfect concentric circle around the core,” he says. “But it turns out that the apparent imperfection of a patched surface actually offers better performance and ease of synthesis.”

The results of the work, which was done with postdoctoral researcher Wei Guo, are documented in a paper, “Patched Bimetallic Surfaces Are Active Catalysts for Ammonia Decomposition,” published in Nature Communications on Oct. 7.

Vlachos and Guo performed multi-scale simulations of the decomposition of ammonia (NH3) on various nickel-platinum catalysts and found that patches of the “guest metal” — in this case, nickel — were very effective at creating and sustaining dual active sites.

“What we have is bifunctional activity, where flat nickel ‘terraces’ catalyze the breaking of nitrogen-hydrogen bonds, and nickel ‘edges’ drive the pairing of nitrogen atoms,” says Vlachos, who is also the Elizabeth Inez Kelley Professor of Chemical and Biomolecular Engineering.

He explains that the decomposition of ammonia is often used as a representative reaction for predicting new catalytic materials and understanding why some reactions are sensitive on a particular material’s structure.

Other advantages of studying this reaction include the need to find less-energy-intensive catalysts to break down ammonia, which is the primary chemical in most fertilizers, as well as ammonia’s ability to serve as a carbon-free energy carrier for fuel cells.

Future work will investigate the feasibility of patched surfaces for additional bimetallic catalysts and other reactions, and Vlachos is optimistic about the potential of the approach.

“What we thought of as a ‘defective’ catalyst was actually two to three orders of magnitude better than the so-called ‘perfect catalyst,’” he says. “This finding opens up broad new horizons for materials design.”

“Determining that the patched structure offers dual active sites means that we can ‘tune’ catalysts to various chemistries and metals,” he adds. “Also, with just patches of the guest metal, rather than full coverage of the core, we can use less material, which could translate into reduced cost.”