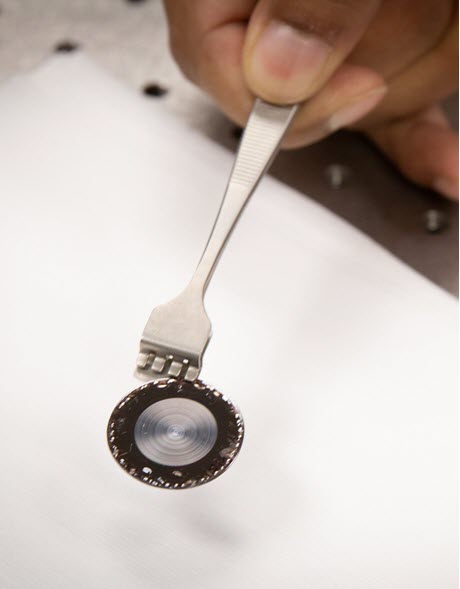 A flat lens developed by researchers at the University of Utah that is much thinner and lighter than a conventional lens that could produce lighter cameras for drones and night-vision cameras for soldiers.Credit: Dan Hixson/University of Utah College of EngineeringOct. 8, 2019 — The new wave of smartphones to hit the market all come with incredible cameras that produce brilliant photos. There's only one complaint—the thick camera lenses on the back that jet out like ugly bumps on a sheet of glass.

But University of Utah electrical and computer engineering researchers have developed a new kind of optical lens that is much thinner and lighter than conventional camera lenses that also works with night imaging, a future boon for smartphones that could flatten those unsightly "camera bumps" as well as for drones and night vision cameras for soldiers.

The team's work is profiled in a new research paper profiled in the latest edition of Proceedings of the National Academy of Sciences. The paper is co-authored by U electrical and computer engineering graduate students Monjurul Meem, Sourangsu Banerji, Apratim Majumder, U electrical and computer engineering associate professors Rajesh Menon and Berardi Sensale Rodriguez, and U mathematics associate professor Fernando Guevara Vasquez. A copy of the paper can be viewed here.

While conventional lenses for smartphone cameras are a couple of millimeters thick, their new lens is only a few microns thick, or a thousand times thinner than regular lenses, according to Menon.

"Our lens is a hundred times lighter and a thousand times thinner, but the performance can be as good as conventional lenses," he says.

A conventional curved lens takes light that bounces off an object and bends it before it ultimately reaches the camera sensor that forms the digital picture. But this new lens has many microstructures, each bending the light in the correct direction at the sensor. The team has developed a fabrication process with a new type of polymer along with algorithms that can calculate the geometry of these microstructures.

"You can think of these microstructures as very small pixels of a lens," Menon explains. "They're not a lens by themselves but all working together to act as a lens."

The result is a lens that is flat instead of curved and more than 20 times thinner than a human hair with the added capability of being used in thermal imaging to see objects in the dark.

While this could ultimately produce smartphone cameras with no bump, it could also give them the ability to take thermal imaging to look for heat signatures. But a more immediate use for this technology would allow lighter military drones to fly longer for night missions or to map forest fires or look for victims of natural disasters. And soldiers in the field could carry much lighter night vision cameras for longer durations.

Menon says this new lens could also be cheaper to manufacture because the design allows them to create them out of plastic instead of glass.