Cancer fighting nanovaccines have shown significant promise, but clinical application has been hampered by complications in large-scale manufacturing, quality control, and safety. Biomedical engineers at the National Institute of Biomedical Imaging and Bioengineering (NIBIB) developed a new technology that enables nanovaccines to bind to the albumin protein naturally present in the body. The albumin protein then delivers these nanocomplexes to the lymph nodes, resulting in potent immune activation against multiple tumor types in mouse cancer models. The use of natural albumin as a universal vaccine shuttle is a significant step towards the application of cancer nanovaccine immunotherapy in humans.

Nanovaccines that work to mount an immune response against a tumor basically consist of two components: the part that delivers the vaccine to the correct site, the lymph nodes, where immune system activation happens; and the part that activates the immune cells to expand and specifically target the tumor.

Schematic of self-assembly of the AlbiVax nanovaccine. The tumor-specific antigen and DNA segment were attached to Evans blue (purple arrows). Upon injection, albumin in the blood (green arrows) binds to the Evans blue and brings the complexes into the lymph system where the DNA and antigen interact with the immune cells (blue) in the lymph nodes. The interaction triggers a vigorous immune response against the target tumor.Image Credit: Zhu, et al1

First author Guizhi Zhu, PhD a post-doctoral fellow in the NIBIB Laboratory of Molecular Imaging and Nanomedicine (LOMIN) explained the new, simplified approach. “We designed a vaccine that binds to a protein called albumin normally found in the body, that also regularly filters through the lymph nodes. Thus, the vaccine essentially hitches a ride with albumin to travel to the lymph nodes, eliminating the need to create a separate delivery vehicle. Given that large-scale manufacturing and long-term safety are the primary hurdles of current nanovaccine technology, our approach offers a detour to accelerate eventual use of nanomedicines in the clinic.” The work is described in the 2017 December issue of Nature Communications.1

How is it formulated?

Several nanovaccines were engineered, each with a different antigen—the component that stimulates the immune cells to attack a specific tumor type. To each antigen, the engineers also added a small dye molecule called Evans blue (EB), that binds to the albumin in the body and has been used for nearly a century in the clinic to study albumin binding proteins. The vaccine-EB complex was named AlbiVax (albumin-binding vaccine) because it immediately binds to albumin. The nanovaccine also included a small segment of DNA bound to the EB; the DNA is a “danger signal” to the immune system and so helps make the immune response more robust.

Thus, the complete formulation consists of an antigen and a DNA segment, both bound to EB. Upon injection, both components bind to albumin, which is why the vaccine is considered to be self-assembling. The albumin carrying the antigen and the DNA then delivers both to the lymph nodes where the antigen activates immune cells that specifically target the tumor, and the DNA enhances that activation, optimizing the immune attack.

Anti-tumor effects of the AlbiVax nanovaccine

The vaccines were tested on several tumor types and in several ways. In one experiment, tumor-free mice were vaccinated against mouse thymus tumor cells. The mice were immunized three times, with two-week intervals. 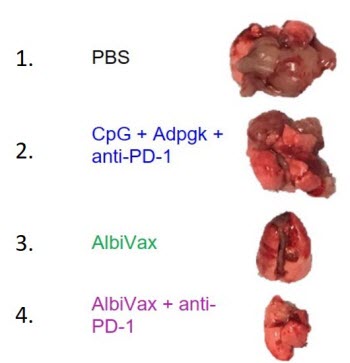 PBS buffer (1) and a control vaccine with a non-specific antigen (2) have no effect on the mouse lung tumors. The AlbiVax nanovaccine (3) significantly reduced tumor size. Nearly all of the tumor was killed when AlbiVax was combined with anti-PD-1, an agent that blocks the tumors attempt to inhibit the immune attack (4).Image Credit: Zhu, et al1At day 70 a large dose of the tumor cells was injected into seven immunized mice as a challenge. Five of the seven mice survived for more than four months. The five surviving mice were injected again with another large dose of the tumor cells, and four of the five mice survived for more than six months. Blood tests showed that four months after the last immunization, the mice still had circulating immune cells that were specifically killing the thymus tumor cells.

An AlbiVax nanocomplex vaccine was also engineered against a human colon cancer cell line. The human colon cancer cells are injected into the mouse where they establish tumors in various organs. Most tumors lodge in the lung, so the system is a good model of aggressive colon cancer cells that have metastasized to the lung. The mice were given the vaccine six days after the lung tumors were established. In this experiment the mice were also treated with an antibody called anti-PD-1, to counter the effects of the protein PD-1 that appears on the surface of some tumors and acts to slow down the immune attack. In this case, the combination of the nanovaccine and anti-PD-1 resulted in the complete regression of lung tumors in six of the 10 mice for four months.

The team is particularly optimistic about the long-lasting immunity that they were able to induce with the AlbiVax system, as evidenced by continued robust anti-tumor activity for up to six months. This was the longest time point tested in these experiments and represents a significant part of the lifespan of a mouse, which is about two years.

Zhu concludes, “albumin is an interesting protein and it has been studied for over 40 years for drug delivery using different technologies. Compared with other albumin-binding technologies, our proprietary technology has been developed using clinically safe EB, making it very promising for eventual clinical translation. By simply synthesizing albumin-binding vaccines, our technology can be applied to virtually any molecular vaccine or molecular therapeutics.”