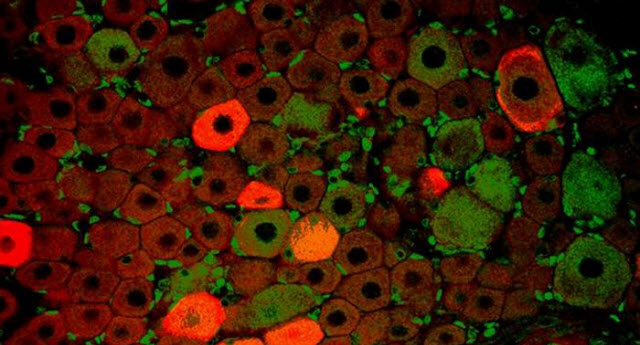 Super-resolution fluorescence microscopy, has made it possible to study molecular processes in living cells.Image Courtesy of: CC BY-SA-Zsynth

In 2014, an international trio won the Nobel Prize in Chemistry for developing super-resolution fluorescence microscopy, a technique that made it possible to study molecular processes in living cells.

Now a Northwestern Engineering team has improved this groundbreaking technology by making it faster, simpler, less expensive, and increasing its resolution by four fold.

"Despite the success of electron microscopy and scanning probe microscope techniques, there has remained a need for an optical imaging method that can uncover not only nanoscopic structures but also the physical and chemical phenomena occurring on the nanoscale level," said said Hao Zhang, associate professor of biomedical engineering in Northwestern's McCormick School of Engineering. "We envision that our technique can accomplish this."

Led by Zhang, the Northwestern team developed a new super-resolution optical imaging platform based on spectroscopy, a type of imaging that examines how matter responds to light. Called spectroscopic photon localization microscopy (SPLM), the platform can analyze individual molecules with sub-nanometer resolution.

"People need a series of filters and cameras to separate photons with different colors and acquire information," Zhang said. "It can be rather complicated and expensive if multiple cameras are employed. Using our technology, we can acquire multi-color images without filters because we know which color is associated with which photons simultaneously."

Supported by a Northwestern Engineering research catalyst award, the research was described online on July 25 in Nature Communications. Vadim Backman, the Walter Dill Scott Professor of Biomedical Engineering, and Cheng Sun, associate professor of mechanical engineering, served as co-authors of the paper. Biqin Dong, a postdoctoral fellow in Zhang's laboratory, and Luay Almassalha, a graduate student in Backman's laboratory, are co-first authors of the study.

While Zhang plans to apply this new technology to his own research in optical imaging, he believes it will be useful for many fields, from materials science to the life sciences.

"Our approach not only enhances existing super-resolution imaging by capturing molecule-specific spectroscopic signatures," he said, "it will potentially provide a universal platform for unravelling nanoscale environments in complex systems at the single-molecule level."