“If we improve our management of land to enhance the biodiversity in our soils, we’ll improve human health,” said Wall, professor in CSU’s Department of Biology, research scientist in the Natural Resource Ecology Laboratory and director, School of Global Environmental Sustainability. Soil biodiversity refers to the variety of life and organisms that exist within a forest, agricultural field, park, or even on a dirt road.

It sounds simple, this type of integration, but the concept is only recently gaining international acceptance. The United Nations declared 2015 as the first International Year of Soils to highlight the value of living soils to humans.

People understand that properly managing soils is key for the global food supply, and that soils are eroding. But less recognized, said coauthor Uffe Nielsen, Western Sydney University in Australia, is the role of living organisms in soils, and how management of those organisms impacts the benefits for human health.

The good, the bad and the dirty

In the past, scientists have studied human, animal and plant diseases caused by some organisms that live in soil—dogs get heartworm from infected soils and humans can get parasites like pinworm that live in some soils.

Valley fever, caused by a fungus thriving in desert soils, affects people and can lead to flu-like symptoms and death. Earlier this month, the Centers for Disease Control and Prevention issued a report on Valley fever and its effect on workers constructing solar power farms in San Luis Obispo County, California. The CDC predicted that without outreach programs and more awareness of Valley fever, more workers will be exposed and infected.

Anthrax, which is well-known in the United States as a bioterrorism agent, is relatively common and found in soils worldwide. Anthrax spores can remain dormant in soils for decades, but with heavy rains, they are brought to the surface and attach to roots and grasses, where animals might graze upon them, often resulting in death. Plants also are killed by pathogens, pests and diseases from the soil, which reduces crops and plant productivity. 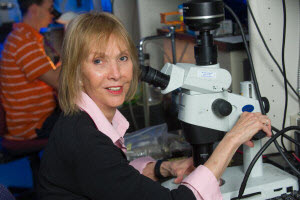 Diana Wall, professor of Biology, director of the School of Global Environmental Sustainability and University Distinguished Professor, in her laboratory.Photo courtesy of Colorado State University“Diseases of humans, plants and animals caused by soil-borne organisms have traditionally been studied by separate disciplines, but the final goal should be an integration of research and knowledge, since the ultimate goal is to improve human health,” said Wall.

In addition, research studies have found that exposure to microorganisms in soil lessens the prevalence of allergies. “Exposing our immune system to soil may help develop tolerance to possible pathogens,” said coauthor Johan Six, Swiss Federal Institute of Technology Zurich in Switzerland.

Soils also contain a reservoir of possible sources for antibiotics and medicines, with many of the antibiotics in use today being derived from soils.

With future predictions that two-thirds of the global human population will live in urban areas by 2050, scientists also expect that our immune systems will be less stimulated by having less contact with nature. Many people already understand this concept; outdoor and nature-based preschools are popping up in urban areas from New York City to Seattle.

What can we do to optimize soil biodiversity for health?

Wall and her co-authors suggest in Nature some alternative approaches for land use and management. This includes implementing practices that enhance soil biodiversity and soil organic matter—including cover cropping, agroforestry and conservation tillage—which can then promote nutrient supply, water infiltration and soil structure. Other recommended approaches include integrated pest management and integrated soil fertility management.

Land, air, water and human health experts also need to band together and develop a plan of action in collaboration with public health organizations, including the United Nations and the World Health Organization. The Global Soil Biodiversity Initiative, launched in September 2011, will soon publish the first global atlas that will serve as a reference for researchers, policymakers and the general public. Wall leads this Initiative.

“If you destroy the soil, you also destroy the beneficial predators and microbes in the soil food web, and disease-causing organisms may take over,” Wall said. The health of humans, animals and plants depend on soils with a robust and diverse community of microbes and invertebrates. We need to protect the life below ground since it’s the health of humans that is ultimately affected.”

Uffe Nielsen and Johan Six are co-authors on this call to action. Nielsen previously worked as a research scientist with Wall and Six has a doctorate in soil science from CSU.