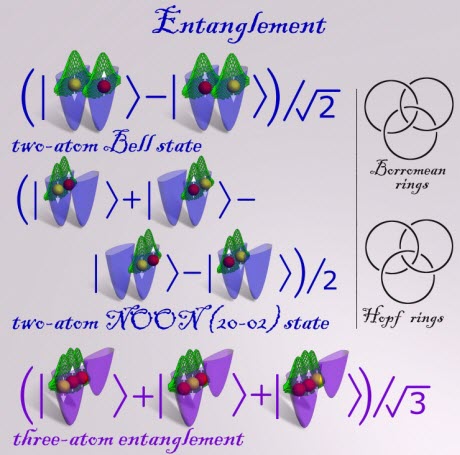 Entangled states calculated through massive parallel computer quantum simulations of two and three ultra-cold fermionic atoms trapped in a double well confinement and interacting via replusive contact interactions. See additional figure description.Image Credit: Georgia Tech Center for Computational Materials ScienceResearchers at the Georgia Institute of Technology have received a $900,000 grant from the U.S. Air Force Office of Scientific Research (AFOSR) to study the unusual chemical and physical properties of atoms and molecules at ultra-cold temperatures approaching absolute zero – the temperature at which all thermal activity stops.

Developing and employing advanced computational methodologies, they will explore the formation of novel types of molecular aggregates at these extreme conditions, where quantum mechanical principles govern and dramatically alter the ways that atoms and molecules interact. The work could help provide a better understanding of the reaction processes underlying strongly correlated atoms and molecular quantum systems in conditions unlike those seen in conventional chemistry.

“Bringing atoms together to make a new material is the basis of chemistry, but here we are synthesizing new materials through quantum mechanical forces,” said Uzi Landman, a Regent’s and Institute Professor and Callaway Chair Professor in the Georgia Tech School of Physics. “We expect to help lay the foundation for a new theory describing the chemistry of ultra-cold atoms. To do this, we will develop a different type of computational theory.”

Absolute zero is the temperature at which all thermal activity stops. The researchers will be studying matter at ultra-cold temperatures, which are in the micro-kelvin or nano-kelvin ranges closely approaching that level. At these extremely low temperatures, atoms and molecules move much more slowly and have different kinds of interactions. These atoms and molecules interact via their wave nature, with interference between waves either destroying or amplifying one another.

In conventional chemistry, activation barriers must be overcome before atoms can exchange electrons to bind together. Because they have so little energy at ultra-cold temperatures, atoms cannot overcome this activation barrier, meaning interactions must occur through other mechanisms – including quantum tunneling effects.

And at these conditions, quantum mechanical effects become more pronounced, with the long-distance entanglement of atoms affecting the physical and chemical states of the matter. “These are pure and deep quantum mechanical objects, and they exist only at these low temperatures because the wave effect takes over,” noted Landman, who is also director of the Georgia Tech Center for Computational Materials Science (CCMS).

At Georgia Tech, Landman’s group will study first the activity of small numbers of atoms and molecules – a phenomenon that CCMS Senior Research Scientist Constantine Yannouleas calls “few-body interactions.” The calculations will begin with just two atoms and build into larger groups of atoms and molecules. “One of the things that is most interesting to us is how smaller systems combine to make larger systems,” Landman added. “We will study this from the bottom up.”

The ultra-cold temperatures will allow study of synthetic solids created by the formation of optical lattices that control the location of atoms at ultra-cold temperatures. Over the past two decades, scientists have learned to trap neutral atoms by lowering their temperature and building optical structures from laser beams to capture these slow-moving atoms.

By constructing layers of atoms held together in this way, scientists can create synthetic solids that are unlike any materials that can be created at conventional chemical reaction temperatures. “Instead of chemical bonds, what holds them together are photons of light from the laser beams,” Landman noted.

In conventional systems, thermal noise acts as a veil to prevent direct study of certain phenomena. By nearly eliminating thermal energy at these ultra-cold temperatures, researchers will be able to study interactions without these complicating effects.

“We can apply these methodologies of ultra-cold atom simulations to solve problems that we cannot solve otherwise,” said Landman. “We will attempt to revolutionize the ability to compute things that aren’t computable at this point. Experiments with ultra-cold atoms emulate an analog-simulator mapping onto the requisite microscopic Hamiltonian, approaching realization of Richard Feynman’s vision of quantum simulators that ‘will do exactly the same as nature.’ In our work, we develop and implement exact benchmark computational microscopy solutions of the system Hamiltonian, uncovering the spectral evolution, wave function anatomy, and entanglement properties of the interacting fermions in the entire system parameter range. In this way we may address some outstanding problem, like high-temperature superconductivity, quantum magnetism, highly correlated quantum systems, and chemistry at the ultra-cold extreme,” he added.

All of this makes for exciting new science that is being explored both experimentally and theoretically at nearly a dozen laboratories around the world. Landman and Yannouleas hope to use the strong background and expertise of the CCMS in computational physics and materials science to make contributions to the computational techniques and modeling used to study these effects.

“The reason this is so exciting is that it will push our ability to calculate interactions a notch farther, advancing beyond what’s known right now,” Landman said. “We’re especially interested in entanglement of atoms, which Einstein called ‘spooky action at a distance.’ The higher the degree of entanglement we have, the more robust the system is and the more certain we can be of the results. This is likely to be of importance for future progress in the areas of quantum information and computations.”