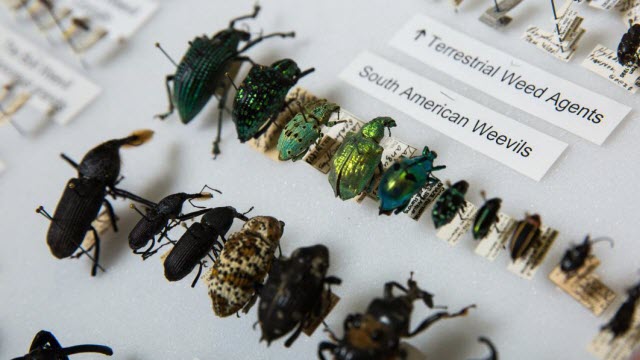 By some estimates, there are about 10 million species of insects on the planet, but only about a tenth have been named. Key in that knowledge gap are the weevils, a mega-diverse group of beetles that devastates crops around the world.

Now, thanks to a $12 million gift from two of the world’s foremost entomologists, Arizona State University is poised to become a leading center for understanding an insect group that has shown potential to be helpful, even as it has been harmful, to the agriculture industry.

Charlie and Lois O’Brien are entrusting to Arizona State University a global collection of meticulously classified insect specimens, including more than 1 million weevils and 250,000 planthoppers.

The gift, one of the world’s largest and most important private collections, more than doubles ASU’s current collection and adds rare and unidentified specimens that could provide enormous scientific value. The O’Briens also are endowing professorships in the School of Life Sciences devoted to insect systematics, the process of identifying and naming new species.

ASU’s “whole approach is exactly what we were looking for as far as potential future research and the use of the collection,” Charlie O’Brien said.

The O’Briens said they selected ASU for the endowment because of its upward trajectory in research funding and strong entomological base, which includes a public insect collection with close to 1 million specimens and its curator, Nico Franz, an expert on the weevil and a long-time colleague of Charlie O’Brien.

Ferran Garcia-Pichel, dean of the Division of Natural Sciences in ASU’s College of Liberal Arts and Sciences, said the gift creates a legacy of the O’Briens’ work as it elevates the university’s capacity for research.

“We are deeply indebted to the O’Briens for their transformative gift,” Garcia-Pichel said.

Franz, curator of ASU’s Frank Hasbrouck Insect Collection, director of the Biodiversity Knowledge Integration Center and associate professor in the School of Life Sciences in the College of Liberal Arts and Sciences, said the university is up for the challenge the gift presents.

“The O’Briens have placed great trust in us as a research community,” he said. “And at the same time, it’s a responsibility for us to make sure this collection has the greatest possible impact in terms of research and mentoring for future generations.”

The Hasbrouck Collection, with close to 1 million specimens, is open to the public and maintained in a newly renovated facility about 2 miles southeast of the Tempe campus. Interaction is a key component, as community members volunteer in research labs and visitors interact with undergraduate and graduate students who work on classifying and digitizing the collection.

“The specimens have a large reach in terms of their scientific visibility and ultimately their scientific impact for both research and mentoring, and that’s at the heart of what the O’Briens were looking for,” Franz said.

Weevils are known for devastating the U.S. cotton industry nearly 100 years ago. In a mournful, old blues song, “Boll Weevil,” singer Lead Belly laments: “Say, why do you pick my farm?”

The invasion forever transformed agriculture in the region, but it wasn’t confined to the U.S. The sweetpotato weevil, for example, has plagued farmers in Central and South America, Southeast Asia and East Africa. In many instances, the bugs reproduce quickly, proving pesticide-resistant and highly mobile.

Weevil pests burrow into plant stalks and lay eggs that hatch into larvae that eat through different plant parts, including roots, stems, leaves, and flowers. Today, there are about 65,000 identified weevil species. Estimates put the total number of species at about 220,000.

The U.S. has taken strides to prevent damage with Agriculture Department eradication programs in place across the South.

But aside from the potential for devastation, weevils can be put to good use. 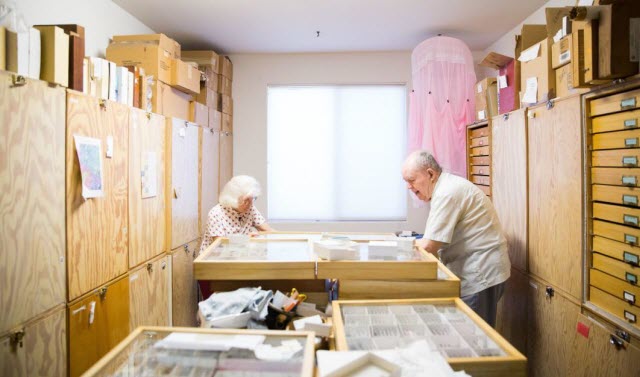 Lois and Charlie O'Brien walk through their weevil and planthopper collection inside Lois' office space at their home in Green Valley, Arizona, on March 8. When they retired to Arizona about a decade ago, they added extra rooms onto the house for their labs. Lois built the glass-topped wooden drawers for their personal collections, which they spent hours sorting, examining, and mounting.Photo credit: Deanna Dent/ASU Now

Charlie O’Brien, a former professor at Florida Agricultural and Mechanical University, became a specialist on biocontrol and created a lab and center to eradicate invasive weed plant species using weevils.

By his count more than two dozen countries have used weevils to control major infestations of invasive terrestrial and aquatic plants.

O’Brien has discovered, or “described,” hundreds of weevil species, and several are named in his honor.

The collection he and Lois O’Brien, a leading expert on planthoppers, donated to ASU includes weevils that are two inches long and others that are mere specks. Among Charlie O’Brien’s favorites are clown weevils from the Philippines, which are colorfully striped. Others are gorgeously iridescent in purple jewel tones.

“One of their unique features,” Franz said of the O’Briens, “is the combination of having amassed something of such great value and at the same time, sharing it so selflessly and widely.”