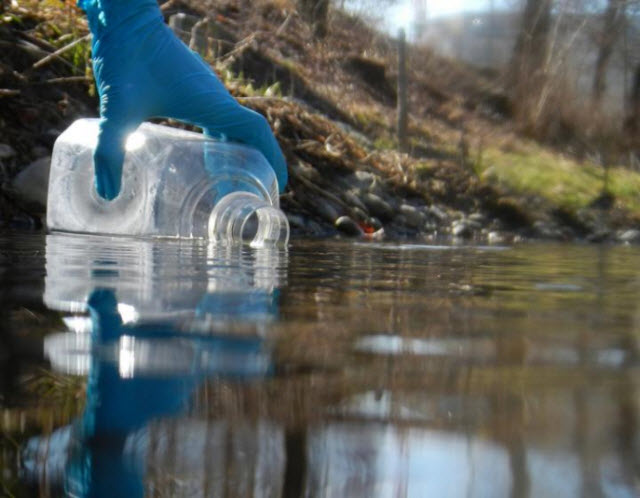 Sampling of 1 liter of river water, in order to subsequently extract DNA from the organisms living in the river.Picture courtesy of: UZH

Most natural ecosystems are heavily affected by changes to the human habitat, climate change or invasive species. In order to protect these ecosystems, one needs to know which organisms live in them. Therefore, assessing the state of and change in biodiversity is central to ecology and conservation biology. However, classical methods are often only suitable for determining a subset of organisms. Moreover, they are expensive and involve collecting the organisms themselves.

Recently, scientists came up with the idea of collecting the DNA of organisms from environmental samples instead, such as soil or water, and determining the various species that way. All organisms constantly shed DNA into the environment, such as via feces or skin particles. This environmental DNA is sequenced using state-of-the-art technology and subsequently matched with databases to determine the species. "This completely novel approach has the potential to revolutionize the study of biodiversity," says Florian Altermatt, a professor at the Department of Evolutionary Biology and Environmental Studies at the University of Zurich and the Swiss Federal Institute of Aquatic Science and Technology (Eawag).

DNA from mayflies and beavers

Altermatt and his team at Eawag in Dübendorf recently provided practical evidence of this idea by collecting water at various points in the Glatt, a river in the Canton of Zurich, and subsequently extracting all the DNA. "We collected a liter of water, which meant we could extract DNA from a staggering number of species, from aquatic insects, such as mayflies, to the beaver who lives further upstream," explains study coordinator Altermatt. DNA from thousands of organisms was compared with traditional estimates of biodiversity. This confirmed that the organisms detected actually live in this environment.

In previous studies, the authors had already demonstrated that rivers transport DNA for several kilometers. "This opens up completely novel approaches to collect information on the diversity of organisms in river systems," says Altermatt. "We can now potentially determine biodiversity in a similar way to the chemistry of the water." Not only do the individual water samples contain information on aquatic organisms, but also land organisms found along the river. Consequently, the scientists gained a fingerprint of the organisms living in entire catchment areas and demonstrate the potential of environmental DNA for determining the biodiversity of all animals, from aquatic insects to mammals.

The study conducted by the UZH researchers reveals that, through their unique network structure, rivers collect and transport DNA containing information on the organisms in the water and on land. As the method can be automated, it might be possible to obtain data on biodiversity in an unprecedented spatial and temporal resolution in the future. "I could imagine that the water samples currently taken by cantonal or federal authorities on a daily or even hourly basis for chemical screening could also be used to record biodiversity," speculates Altermatt.