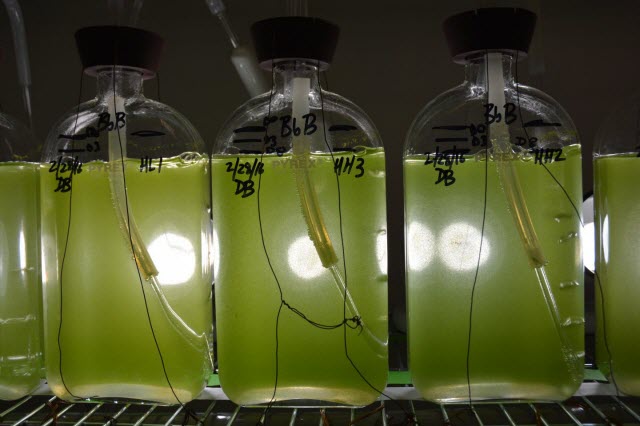 The study, published in the current issue of the journal Nature Communications, could enable scientists to use the enzyme in a plant to make large amounts of fuel-grade oil, according to Dr. Tim Devarenne, AgriLife Research biochemist in College Station and lead scientist on the team.

Devarenne's lab has been studying the concept of making fuel from algae on a $2 million National Science Foundation grant for four years.

"The interesting thing about this alga is that it produces large amounts of liquid hydrocarbons, which can be used to make fuels such as gasoline, kerosene, and diesel fuel," Devarenne said. "And these liquid hydrocarbons made by the alga are currently found in petroleum deposits, so we are already using them as a source to generate fuel. "Botryococcusis found pretty much everywhere in the world except for seawater," he added. "It's very cosmopolitan. It grows in freshwater or brackish water. It's found in almost all ponds and lakes around the world. It's been found in every continent except Antarctica, and it grows from mountain to desert climates."

What his lab has been trying to understand is how Botryococcus braunii makes the liquid hydrocarbons–what genes and pathways are involved–so the genes can be manipulated to make more oil, possibly by transferring those genes into a land plant like tobacco, or maybe other algae that grow very quickly, Devarenne said. 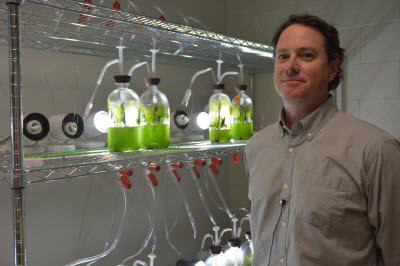 Dr. Timothy Devarenne studies the biofuel properties of a common green microalga called Botryococcus braunii in his lab at Texas A&M University.Photo credit: Kathleen Phillips, Texas A&M AgriLife Research"One of the issues with Botryococcus is that it grows very slowly. You just don't get a lot of biomass and on an economic scale that means it would not work to use this alga. It takes about a week for one Botryococcus cell to double into two cells, whereas a faster growing algae–but one that doesn't make a lot of oil–can double in about six hours," he said. "Maybe if we can transfer the genetic information to make these oils into quicker growing organisms like other algae that grow a lot quicker or a land plant that can produce large amounts of biomass, we can have them produce oil for us."

"In this study, we were interested in deciphering the biochemical pathway for making this oil, which is called lycopadiene," he said. "We discovered a very interesting gene that's called lycopaoctaene synthase, or LOS. And the enzyme encoded by the LOS gene is able to initiate the production of the oil, so we started to essentially pick apart this pathway."

A closer look at the LOS enzyme revealed that the enzyme is "promiscuous" in that it is capable of mixing several different substances, or substrates, to make different products, Devarenne said.

"While that ability is found fairly often throughout nature, it's unique for this type of hydrocarbon and enzyme," he noted. "We were able to characterize that this enzyme from this alga is able to make several different hydrocarbon-like products."

Devarenne explained that's not only different from other enzymes that are similar to LOS, but it's important because most enzymes like LOS only use a 15-carbon substrate. In terms of fuel, it's better to start with a higher carbon number molecule.

The team determined the sequence of all the actively "working" genes of the organism under hydrocarbon producing conditions. Bioinformatic analysis of this sequence information was then able to pinpoint a gene that might have the appropriate activity to initiate hydrocarbon biosynthesis, Molnar said.

"Modern sequencing technology in conjunction with sophisticated bioinformatics algorithms increasingly allows us to map the biochemical potential of many organisms–even those that are difficult or even impossible to grow in laboratory conditions," Molnar noted. "This technology, referred to as 'genome mining,' allows the closer investigation of interesting enzymes, so that these enzymes could later be used for many applications in healthcare, agriculture or various chemical industries, or for biofuel production as is the case here."

"We're still a ways away from making a commercial product, but our next step is to finish deciphering the pathway," Devarenne said. "We've identified the very first step in the pathway - making the first 40 carbon hydrocarbon. We have some gene candidates for the next step of the pathway, and we are just starting to characterize those."

Even when the genes are more fully understood, scientists will have to find the right host organism to express the genes, optimize that expression and try to get them to produce as much of the oil as possible - all of which involves a lot of basic research and time, he said.

Plus, when oil prices go through a slump, he said, the government support of alternative fuel sources wanes.

"There is a roller coaster of funding depending on what the price of oil is," Devarenne said. "But we believe we should be making biofuels and replacing petroleum, and it's not good policy in our mind to only worry about fuel supplies based on the price of oil. It should be pursued no matter what."