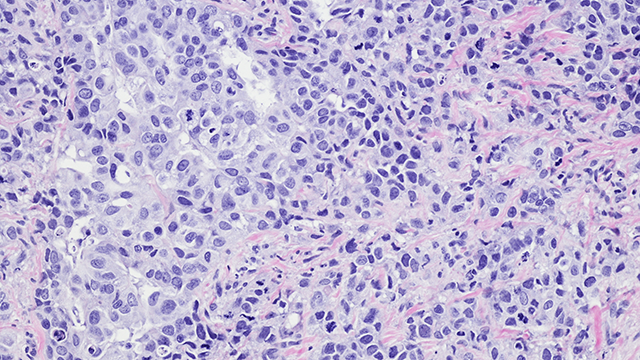 The study, published Jan. 11 in the journal Cell Chemical Biology, suggests that exposure to chemical compounds called xenoestrogens may significantly reduce the effectiveness of anti-estrogen treatments for cancer.

The palbociclib/letrozole combination therapy was approved by the U.S. Food and Drug Administration in 2015 after a clinical trial showed it doubled the progression-free survival time in postmenopausal women with estrogen receptor (ER) positive, metastatic breast cancer. Letrozole blocks the production of estrogen, thus reducing the growth-promoting stimulation of ERs on breast cancer cells. Palbociclib blocks a different signaling pathway to impede cell division. The combination is now one of the standard therapies for ER-positive breast cancers.

“By profiling cell metabolomes with and without drug treatment we can get very useful information, for example about the biological pathways perturbed by the drug,” says Siuzdak, a professor of chemistry, molecular and computational biology.

Cancer researchers are increasingly concerned that xenoestrogens in food and water may enhance the growth of estrogen-fueled cancers, and may also hamper the effectiveness of anti-estrogen drugs such as letrozole. TSRI scientists therefore examined breast cancer cells treated with palbociclib/letrozole to see how their metabolite populations changed when they were also exposed to two common dietary xenoestrogens: zearalenone and genistein.

Zearalenone is produced by fungi that colonize maize, barley, wheat, and other grains. It has been linked to birth defects and abnormal sexual development in pigs and other livestock, and is suspected of having caused an outbreak of early breast development among girls in Puerto Rico in the 1970s. Genistein is produced in certain plants including soybeans and is often highly concentrated in phytoestrogen-rich food supplements.

Under the influence of either xenoestrogen, the breast cancer cells also resumed proliferating at a rate comparable to that seen in the absence of drug treatment.

“It’s intriguing that even a low, background-level exposure to these xenoestrogens was enough to impact the effect of the therapy to this degree,” says Warth, who is now an assistant professor at the University of Vienna’s Department of Food Chemistry & Toxicology.

The results indicate that these dietary xenoestrogens do have the potential to affect cancer therapy outcomes—and genistein and zearalenone are just two of the many xenoestrogens commonly found in the human diet. “There’s a high likelihood that other xenoestrogens would counteract the therapy in a similar way,” Siuzdak says.

The impact of xenoestrogens on health and on hormonally-targeted therapies is nevertheless an understudied, underfunded area of research, the researchers emphasized.

“We generally know very little about the interactions of bioactive compounds we are exposed to through our food or the environment with drug treatments,” Warth says. “So, in this field there are probably a lot of clinically relevant discoveries yet to be made.”

Other co-authors of the study, “Metabolomics reveals that dietary xenoestrogens alter cellular metabolism induced by palbociclib/letrozole combination cancer therapy,” were Philipp Raffeiner, Ana Granados, Tao Huan, Mingliang Fang, Erica M. Forsberg, and H. Paul Benton, all of The Scripps Research Institute at the time of the study; as well as Caroline H. Johnson at Yale University and Laura Goetz of the Scripps Clinic Medical Group.

Funding for the research came from the Austrian Science Fund (Erwin-Schrödinger fellowship awarded to Benedikt Warth), the George E. Hewitt Foundation for Medical Research and the National Institutes of Health (grants R01 GMH4368 and PO1 A1043376-02S1).