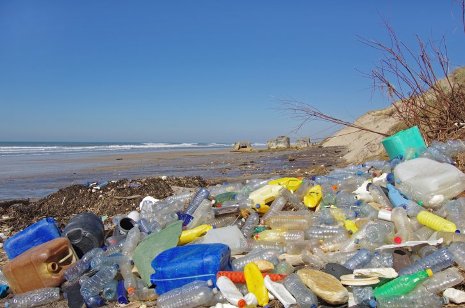 When Michigan Tech's Joshua Pearce developed fair trade standards for 3D printer filament, he had two goals: improving the lives of waste pickers and making waste plastic so valuable that scenes like this would be a thing of the past.

It’s old news that open-source 3D printing is cheaper than conventional manufacturing, not to mention greener and incredibly useful for making everything from lab equipment to chess pieces. Now it’s time to add another star to the 3D printing constellation. It may help lift some of the world’s most destitute people from poverty while cleaning up a major blight on the earth and its oceans: plastic trash.

At the center of the movement is a new set of standards inspired by fair trade products ranging from diamonds to chocolate.

“We are creating a new class of material called ethical 3D printing filament, like fair trade coffee,” said Joshua Pearce of Michigan Technological University. “It’s a way to help the poorest of the poor up the economic ladder.”

Waste pickers in the developing world barely eke out a living scouring landfills for trash to sell. They usually don’t bother with plastic, however, because it has almost no value.

But thanks to an emerging market, waste plastic may soon be a more alluring target; it can serve as a feedstock for 3D printer filament. What makes it especially attractive is the cost of conventional filament made from virgin plastic: about $35 to $50 a kilogram.

Pearce’s group has already developed a recyclebot that turns milk jugs and other plastic trash into filament for pennies on the dollar. And next-generation commercial-grade recyclebots are creating opportunities for businesses. But for waste pickers to truly benefit, Pearce says, the recycled filament industry will need to adhere to certain fair labor and environmental practices.

Here’s how it would work. Under fair trade standards for ethical 3D printing filament, manufacturers would guarantee that their enterprise meets certain conditions, which Pearce and his colleagues published in the Journal of Sustainable Development. They include the following:

Businesses that make or use ethical filament could charge a premium for their product, though it would still cost less than conventional 3D filament. “Filament prices are so high that places like Protoprint could sell their filament at half that price and still give pickers a living wage while doing good for the environment,” said Pearce.

Protoprint, a 3D printing firm in Pune, India, is collaborating with techfortrade. The London-based nonprofit harnesses technology to eliminate poverty through economic development. After working with Pearce, techfortrade plans to fully implement his fair trade standards for filament in the Ethical Filament Foundation.

“Joshua’s knowledge and his passion, plus his open, collaborative approach, persuaded us that his ethical filament standards would do for 3D printer filament what Fair Trade did for coffee,” said William Hoyle, CEO of techfortrade. “We’re now close to making this idea a reality; Protoprint is planning to make the first ethical filament offering available in January, and our other ventures in Latin America will follow.”

The paper on fair trade filament, “Evaluation of Potential Fair Trade Standards for an Ethical 3D Printing Filament,” is coauthored by Pearce, Savanna R. Feeley of Michigan State University and Bas Wijnen, a PhD candidate in materials science and engineering at Michigan Tech and published this month in the Journal of Sustainable Development.