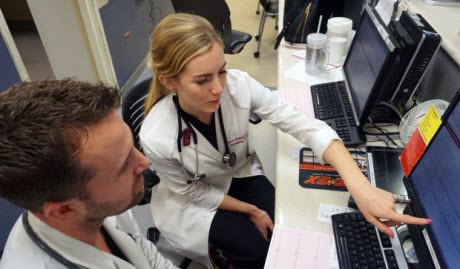 Carrie Jurkiewicz, MD, chief emergency medicine resident at the University of Chicago Medicine, reviews a case with Gregg Helland, MD, associate professor of medicine at the university.Photo courtesy of the University of Chicago MedicineAlthough female doctors training to become emergency medicine specialists scored as well as their male colleagues during the first year of their three-year programs, by the end of the third year, male residents, on average, received higher evaluations on all 23 emergency medicine training categories—including medical knowledge, patient safety, team management and communication—than female residents.

The gap emerged early in the second year of training and steadily widened until graduation.

By the end of the third and final year of residency, evaluations of female physicians placed them three to four months behind male colleagues in the same training programs.

“Women are already underrepresented in the highly competitive environment of academic medicine, and the period of greatest loss is during and shortly after residency,” said the study’s senior author, Vineet Arora, MD, associate professor of medicine at the University of Chicago.

“The results are definitely concerning,” said the study’s co-lead author, Arjun Dayal, a medical student at the University of Chicago Pritzker School of Medicine. “The wide difference between males and females, seen at all of the institutions that participated in this study, suggests that medical school faculty who evaluate residents should be aware of and attuned to ongoing concerns about gender bias.”

The study, published March 6, 2017, in JAMA Internal Medicine, included 359 emergency medicine residents—medical school graduates beginning advanced training in the specialty. One third (122) of the residents were female; two-thirds (237) were male. About a third of the faculty physicians who evaluated the trainees were female (91) and two-thirds were male (194). Male and female faculty members evaluated residents similarly, consistently giving female residents lower scores throughout residency years two and three.

From July 1, 2013, to July 1, 2015, the researchers collected 33,456 “milestone” evaluations, about 90 for each of the physicians in training. Milestone evaluations are detailed, direct observations by emergency medical faculty of residents performing 23 sets of tasks—known as subcompetencies. These include basic skills such as diagnosis and medical knowledge, as well as specific procedures, such as emergency stabilization, airway management, or vascular access.

This evaluation system, adopted by the Accreditation Council for Graduate Medical Education, is now used by all U.S. training programs. The nationally standardized approach allows for analysis of performance “at a scope and level of detail never previously possible,” the authors note. This study is the first to focus on how gender affects the process.

The training programs studied represent a mix of rural, suburban, and urban hospitals. They included small, medium and large academic as well as community-hospital programs. Results from all of the programs were comparable.

At the end of their first year of training, female residents scored slightly higher than males on 15 of the 23 subcompetencies, with notably higher scores in accountability, multitasking and diagnosis.

By the end of the third year, however, males had gained higher scores in all 23 categories, with much higher totals in airway management, general approach to procedures, team management, emergency stabilization, focused history and physical examinations, disposition, multitasking, vascular access, and performance improvement. Throughout their training, males had a 13 percent higher rate of milestone attainment per year, equivalent to 3 to 4 months of additional training by graduation.

Scores given by male and female faculty members were similar throughout the period studied. The authors suggest that their results highlight the need for faculty physicians to be on the lookout for possible gender bias in residency training. Although senior residents, for example, are expected to display stereotypically male characteristics such as assertiveness and independence, female residents who display such qualities may incur a penalty, even among their female role models, for violating customary gender roles.

Related Article: Sex, Gender, or Both in Medical Research

“One way to interpret our findings is that a widening gender gap is attributable to the cumulative effects of repeated disadvantages and biases that become increasingly pronounced at the more senior levels of training,” the authors wrote.

“We are concerned that the disparity we discovered in evaluations may point to an implicit bias,” said co-lead author Daniel O’Connor, a student at the University of Pennsylvania Perelman School of Medicine. “Our finding, that female residents in emergency medicine receive lower scores than males across all sub-competencies really implicates bias rather than a deficit in specific skills or knowledge.”

There has been discussion at the national level of one day having residents graduate only after demonstrating competency in the core areas of a specialty. This could lead to variable training lengths from resident to resident. “Based on our results,” O’Connor said, “this would mean female residents could be required to complete additional training to graduate at the same level as their male counterparts.”

Surveys show that 70 percent of female doctors in academic settings—more than three times as many as male doctors—had perceived workplace gender bias in the academic setting. Female academic physicians get paid less and hold fewer leadership positions.  “We hope that our findings will focus attention on this disparity and encourage efforts to improve and provide balance, as needed, in the residency evaluation system,” Arora said.