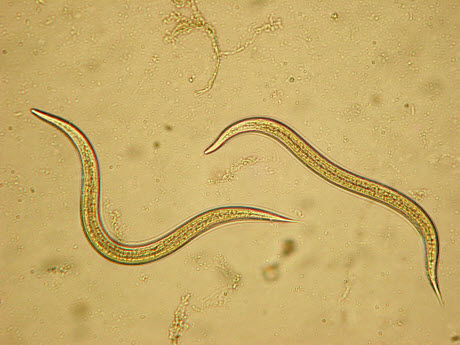 Bashey-Visser's research focuses on an insect-killing nematode in the genus Steinernema.Photo credit: Cole BeelerBut now scientists at Indiana University and elsewhere are finding evidence that an invisible war between microorganisms may also be catching humans in the crossfire.

This conflict is discussed in a recent article from IU biologist Farrah Bashey-Visser in the journal Philosophical Transactions of the Royal Society B: Biological Sciences.

"Bacteria aren’t just evolving to resist new drugs, they are also constantly evolving due to competition with other microorganisms," said Bashey-Visser, an assistant scientist in the IU Bloomington College of Arts and Sciences’ Department of Biology.

The result is that humans can be left trying to play catch-up.

The highly antibiotic-resistant bacteria MRSA, or methicillin-resistant Staphylococcus aureus, for example, has been shown to resist treatment in some cases due to competition with other microorganisms.

In the article, Bashey-Visser said a study recently conducted in Europe found a strain of MRSA became resistant to vancomycin after evolving within an infected host. A naturally occurring antibiotic reserved to fight the most serious infections, vancomycin was originally isolated by Eli Lilly and Co. in 1953 from soil collected by a missionary in Borneo.

The new mutant strain of MRSA in the overseas study overtook the original MRSA strain by producing a growth-inhibiting toxin. These toxins, called bacteriocins, are a common defense mechanism used by bacteria to compete against genetically similar microorganisms. However, in response to exposure to the bacteriocin, a third strain evolved resistance to the toxin and, coincidentally, to vancomycin.

This MRSA strain could resist the drug as a side effect of its evolutionary interactions within a host -- a process that differs from the more typical path where antibiotic resistance arises in direct opposition to treatment.

"The more scientists understand the processes that shape the evolution of potential pathogens, the more they will be able to predict the amount of time their treatments will remain effective," Bashey-Visser said.

Physicians commonly use a "reductionist approach" to fight infections, she added. They identify the pathogen, then do whatever is the most effective to stop it.

But, while effective, this approach may also have unintended consequences. 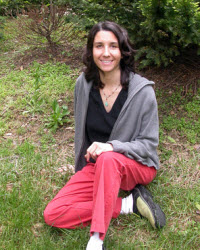 Farrah Bashey-VisserPhoto credit: Idelle Cooper"We're realizing more and more that harmful bacteria are just one part of our body's ecosystem, or 'microbiota,'" she said. "Broad-spectrum antibiotics can wipe out numerous beneficial bacteria species too -- or worse, create an unprotected space where new species come in and wreak havoc."

"Other studies are increasingly tracing situations where one person becomes sick while another doesn't to the presence of beneficial microorganisms," she said. "These probiotics, or 'good bacteria,' prevent infection by attacking disease-causing bacteria."

The use of less virulent bacteria to competively defeat disease-causing microorganisms is the basis of "replacement therapies," Bashey-Visser said. The process is similar to new treatments such as fecal transplants, in which a stool sample from a donor is introduced into the gastrointestinal tract of a patient through colonoscopy, which can restore a healthy microbiota. The procedure is an increasingly common treatment for life-threatening conditions such as Clostridium difficile infection, or CDI.

According to Monika Fischer, an assistant professor of clinical medicine at the IU School of Medicine in Indianapolis who established one of the first fecal transplant programs in Indiana in 2012, doctors who perform the procedure, which colonizes patients' "gut flora" with healthy microorganisms, report a cure rate of about 90 percent.

The species is an insect-killing nematode in the genus Steinernema whose life cycle depends on bacteria. These roundworms, which carry a small amount of bacteria in the genus Xenorhabdus in a pouch off their intestines, cannot grow into adults until they enter an insect and release the bacteria. The bacteria helps kill and digest the insect, creating an environment in which the nematode can mature and reproduce.

"The life cycle of these tiny parasites is pretty crazy and, in many ways like our own dependence on microorganisms, wouldn’t be possible without bacteria," said Bashey-Visser, whose work has revealed that competitive dynamics among the bacteria in these insects can maintain a diversity of strains within a single species.

"The more we understand these dynamics, the more we will understand about genetic diversity and preserving biodiversity," she added.

All of the insects and nematodes analyzed in Bashey-Visser's research were collected at the Moores Creek location of the IU Research and Teaching Preserve, a 1,600-acre area of protected natural resources used to support research, teaching and outreach at the university.

Also appearing in the same issue of the journal is a study by Britt Koskella -- a former IU graduate student studying under Curt Lively, IU Distinguished Professor of Biology -- whose research explores how competition among two species of bacteria in horse chestnuts trees ultimately protects the plant from infection.

Koskella is now an assistant professor at the University of California, Berkeley. Bashey-Visser's research on nematodes is supported in part by a grant from the Division of Environmental Biology at the National Science Foundation. Lively is also a collaborator on the grant.