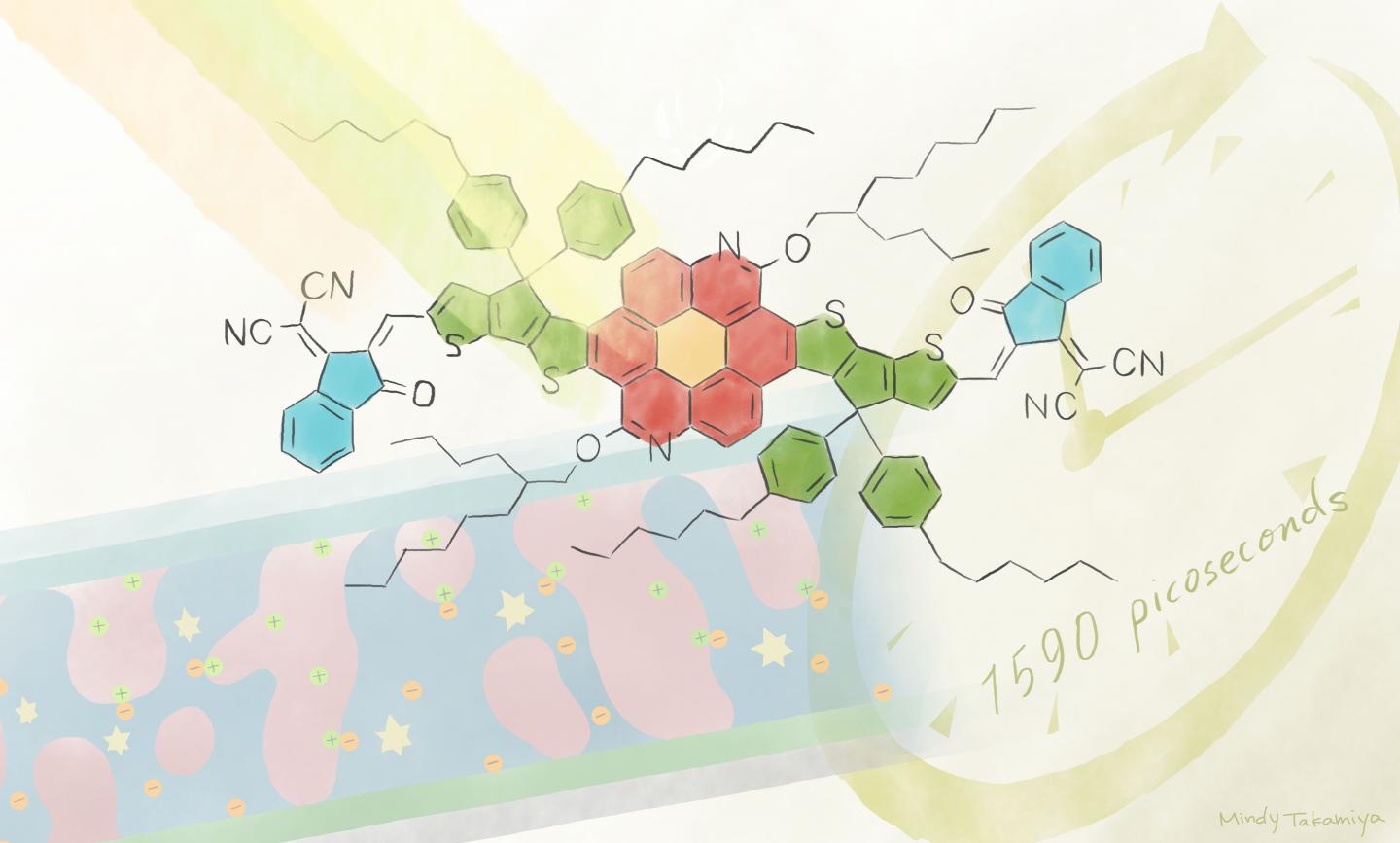 The new electron-accepting molecule TACIC can maintain its excited state 50 times longer than a conventional one.
Illustration by Mindy Takamiya

A molecular tweak has improved organic solar cell performance, bringing us closer to cheaper, efficient, and more easily manufactured photovoltaics. The new design approach, targeting the molecular backbone of the cell's power-generating layer, was developed by scientists at Kyoto University's Institute for Integrated Cell-Material Sciences (iCeMS) and published in the journal Chemical Science.

Organic photovoltaics are expected to become the next generation of solar cells as they use cheaper components, and are more lightweight, flexible and easily manufactured compared to currently used inorganic solar cells.

"There is growing concern over the use of fossil fuels and their environmental impacts," says Hiroshi Imahori, a molecular engineer at iCeMS who led the work with colleague Tomokazu Umeyama. "We need to work hard to improve sustainable energy systems."

The power-generating layer in organic photovoltaics contains molecules that either donate or accept electrons. Light is absorbed by this thin layer, exciting the molecules, which generate charges that go on to form an electric current. But for light to be efficiently converted to electricity, the electron-accepting component needs to stay excited.

One type of organic cell is very good at absorbing a broad spectrum of light, but doesn't stay excited for long. To try to address this, Imahori, Umeyama, and their colleagues in Japan targeted the molecular backbone of the cell's electron-accepting component. Specifically, they replaced a central ring with a molecule called thienoazacoronene, creating a new molecule called TACIC.

Similar to its predecessor, TACIC absorbed a broad spectrum of visible and near-infrared light. Significantly, it maintained its excited state 50 times longer, converting more than 70 percent of light particles into current. The design achieved this by stabilizing the vibration and rotation that normally occur when light is absorbed, saving kinetic energy and facilitating intermolecular interaction.

The cell continues to have a power conversion efficiency of just under 10 percent, which is comparable to other organic solar cells being researched. The team believes modifications to the side chains and core structure of the thienoazacoronene molecule could further improve the efficiency of organic photovoltaics.