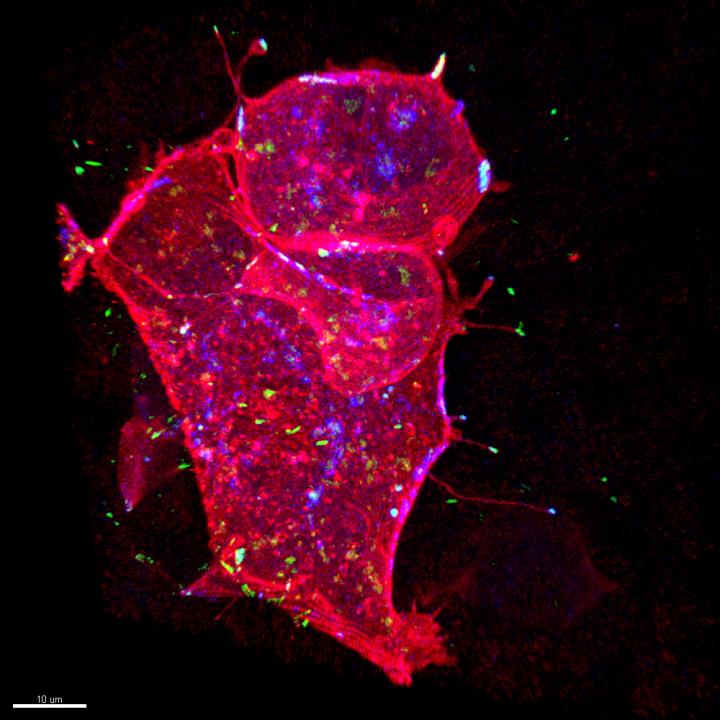 Zebrafish cells distributing signalling molecules called Wnt signals via cellular protrusions known as filopodia.Picture taken by B. Mattes with a Leica Sp8 FALCON system with a 63x dipping lensA new system capable of probing microscopic environments inside cells has been installed at the University of Exeter's Bioimaging Centre.

The technology, the latest addition to the university's arsenal of world-class microscope systems, makes possible a number of new pioneering techniques, and can scan samples at more than ten times the rate of conventional systems.

Professor Gero Steinberg, Director of the Bioimaging Centre, said: "This technology is a highly sophisticated imaging system. It complements existing state-of-the-art facilities and will help us to deliver further world-leading research."

To investigate how a cell functions, scientists often fluorescently label particular proteins, which act as microscopic cellular machines each with unique functions.

The behavior of the protein can then be monitored using this fluorescent tag.

Professor Steffen Scholpp, who won the BBSRC award for the purchase of the system, said: "This system allows the precise quantification of fluorescent proteins by two new techniques. Having access to such advanced technology puts us in a leading position in the UK."

The new technology—TCS SP8 FALCON, made by Leica Microsystems - will facilitate "fast fluorescence lifetime imaging" and "fluorescence correlation spectroscopy", allowing scientists to investigate the environment of proteins in specific areas of a cell.

Dr Christian Hacker, imaging specialist in the Bioimaging Centre, added: "The speed and ease of acquiring data will enable users to study molecular interactions, investigate the environments of multiple proteins simultaneously and detect changes in metabolic state and microenvironments with a high degree of accuracy."

The School of Biosciences in Exeter covers many aspects of biomedical research, reaching from fungal-related plant disease research to signaling biology in embryonic development.

Professor Scholpp states: "The FALCON is a game changer for protein biology - in bacteria, fungi, plants and animals.

"With this system, it is now possible for researchers to generate dynamic maps of protein interactions in living cells."