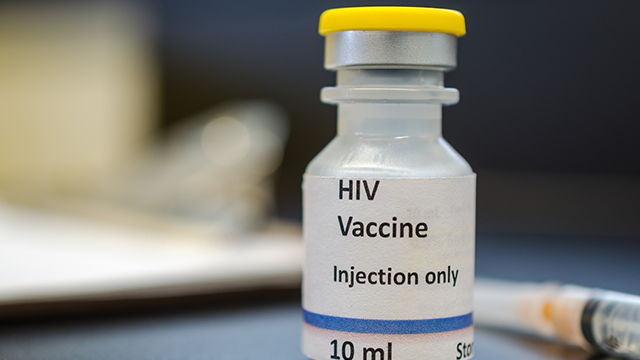 LA JOLLA, CA — An experimental HIV vaccine developed by scientists at Scripps Research and the nonprofit vaccine research organization IAVI has reached an important milestone by eliciting antibodies that can neutralize a wide variety of HIV strains.

The tests, in rabbits, showed that these "broadly neutralizing" antibodies, or bnAbs, targeted at least two critical sites on the virus. Researchers widely assume that a vaccine must elicit bnAbs to multiple sites on HIV if it is to provide robust protection against this ever-changing virus.

The promising results, which appear in Immunity, suggest that researchers are one step closer to developing an effective HIV vaccine—a major goal of medical science ever since the virus was identified in 1983.

"It's an initial proof of principle but an important one, and we're now working to optimize this vaccine design," says the study's senior author Richard Wyatt, PhD, a professor in the Department of Immunology and Microbiology at Scripps Research.

According to UNAIDS, about 35 million people worldwide have died of the immunodeficiency syndrome, AIDS, which is caused by HIV infection. About 38 million others are now living with HIV infection. Antiviral drugs can keep HIV-infected people alive and reduce their ability to transmit the virus to others, but these drugs do not clear the infection and must be taken indefinitely. Researchers have long recognized that a preventive vaccine, available at a low cost to uninfected people, will be needed to eliminate HIV as a major public health threat.

HIV's rapid mutation rate and other mechanisms for evading immune attack have made it an extremely difficult target for vaccine designers. But the test conducted by Wyatt and his team confirms that vaccination can elicit the kinds of antibodies that are needed to provide broad protection against HIV. These bnAbs, as vaccine experts call them, can neutralize multiple HIV strains because they bind to critical sites on the virus that do not vary much from strain to strain. People who are infected with HIV sometimes produce bnAbs as part of their antibody response, but infrequently and usually after infection has been long established. The chief challenge for HIV vaccine designers has been to find ways to stimulate the immune system—in most or all individuals—into making bnAbs that hit multiple vulnerable sites on the virus, in order to protect against a high proportion of HIV strains.

At the heart of the vaccine design by Wyatt and colleagues is a virus-mimicking protein based on HIV's "Env" protein. Normally, multiple copies of bush-like Env proteins are spread out on the surface of each spherical HIV particle. Each Env protein contains a molecular mechanism that allows it to bind to a receptor on immune cells known as CD4, and use that receptor as a portal to break into the cell. The researchers engineered a version of Env that models the essential structures on the real Env while being stable enough to use as a vaccine. To present it in a way that would resemble a real HIV virus particle, they created virus-sized synthetic spheres of fat-related molecules, "liposomes," which are studded densely with the engineered Env proteins.

On a natural HIV Env protein, thickets of sugar-related molecules called glycans normally help shield the all-important CD4 binding site from immune attack. As an initial "priming" immunization, the researchers used versions of Env in which this glycan shield around the CD4 binding site had been partly removed.

"The idea was to better expose this site and thereby stimulate a broad antibody reaction to it at the start," Wyatt says.

Subsequent booster immunizations over 48 weeks used Env proteins with restored glycans, to select for antibodies that target the CD4 binding site but can also get through this shield. The Env proteins in the booster shots also were mixes based on different strains of HIV, to generally promote antibody responses against Env structures that do not vary among these strains.

The team inoculated 12 rabbits following their vaccine strategy and compared the results with a control group that received only a single, glycan-shielded version of Env. They found that their vaccine strategy had a much better response, with five of the rabbits developing antibodies that could neutralize multiple HIV isolates.

The researchers analyzed the antibodies of the rabbit that had responded most strongly, and identified two distinct types of bnAb. One, which they called E70, blocks the CD4 binding site as expected, though in an unusual way—partly by grabbing one of the shielding glycans. The other, 1C2, hits a different but well known vulnerable spot on Env, at the interface between two key segments of the complex protein. The binding of antibody 1C2 apparently destabilizes Env so that it can no longer mediate HIV's entry into host cells. That antibody also turned out to have an unusual breadth of neutralization, blocking 87 percent of a panel of 208 distinct HIV isolates.

The finding is an important demonstration that vaccination against HIV, if done in the right way, can achieve the goal of inducing bnAbs to multiple sites on the virus, Wyatt says.

The team of scientists are continuing to test and improve their vaccine strategy in small animal models and hope eventually to test it in monkeys and then humans.