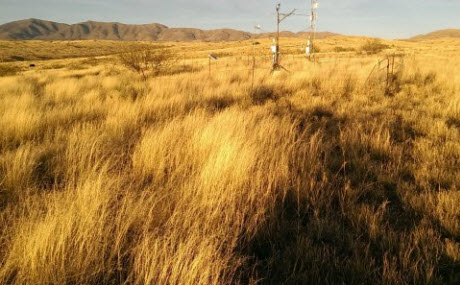 Lead image: Micrometeorological measurements at Kendall Grassland, Arizona.Photo Credit: Russ Scott, USDA-ARSAs the climate warms, droughts are expected to become more extreme and more frequent. During the past two decades, large areas in the US have experienced extreme drought. Wouter Peters and Ingrid van der Laan-Luijkx of Wageningen University, together with colleagues, determined the consequences of the extreme drought of 2012 on the carbon uptake of plants in the United States. The damage to forests appeared to be limited, but that did not apply to the grain harvest.

In 2012, an extreme drought held much of the US in its grip, affecting about 62 percent of the total land area. The United States had not experienced such a large area affected by drought since the Dust Bowl in the 1930s. Many crops were damaged severely. Wouter Peters and Ingrid van der Laan-Luijkx, together with Sebastian Wolf of ETH Zurich and others, studied the impact of this drought on the carbon uptake of plants. The aim was to improve understanding of the interaction between plants and the atmosphere. Their study was published today (Apr. 26) in the Proceedings of the National Academy of Sciences (PNAS).

“The outcome was surprising,” says Wouter Peters. “The impact of the summer drought on total annual carbon uptake of plants was much smaller than we had expected. This was because the forests on the east coast took advantage of the higher temperatures during the spring to grow extra. We can substantiate this conclusion with measurements on the ground, in the atmosphere, and with the aid of satellites and other technology. This additional growth in the spring also resulted in extra rapid drying of the soil before the summer, which is an interesting link in the carbon-vegetation system. We will definitely perform follow-up research on this topic.”

The study was conducted using satellite measurements and a large terrestrial network that measured the exchange of water vapor and CO2 above the vegetation (the flux) from minute to minute. The resulting data were then checked from the atmosphere using CarbonTracker, a system developed by the Meteorology and Air Quality Group. “This study shows that our Wageningen CarbonTracker is a powerful tool to understand changes in the carbon cycle, provided, of course, that sufficient measurements are taken,” explains Ingrid van der Laan-Luijkx. “The results show that the rapid increase in CO2 uptake during the warm spring limited the damage in forests during the summer, at least in terms of reduced carbon storage. This may have come at a price, however, in the form of the subsequent summer heat and smaller grain harvest that year.”

Wouter Peters: “It is not often that such a variety of measurements gives such a clear and consistent picture of the interactions between plants and the atmosphere. With this study we have reaped the rewards of some excellent lines of research that the PhD candidates and postdocs in my group have developed over the past few years. This insight into the links between land and atmosphere, especially when it comes to evaporation and carbon uptake by plants, is important to assess the effects of drought on agriculture and forestry. The consistent picture that we now have with the aid of a variety of measurements shows that unexpected processes occur, which should have a place in the models used to predict droughts worldwide.”