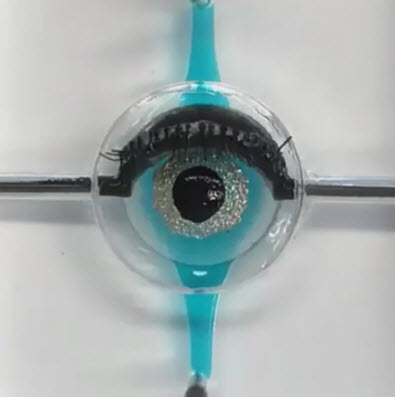 Microfluidic channels bring nutrients to cells growing on the surface of this eye-on-a-chip. The 3-D-printed eyelid simulates blinking so as to better model the conditions of dry eye disease.Image courtesy of the University of PennsylvaniaA clump of cells in a Petri dish may have the same DNA as their counterparts in the body, but most of the similarities end there. Testing how they respond to new drugs, toxins, or environmental pollutants provides some insight into how cells might behave in the real world, but such tests can’t account for a myriad of factors that come along with the rich, three-dimensional environment they naturally exist within. Animal models provide a closer picture, but come with their own anatomical idiosyncrasies and ethical concerns.

These challenges, however, are preferable to the alternative: exposing humans to chemicals with unknown effects and risk. Without some sort of testing platform, research on diseases and their treatments would grind to a halt.

Advances in bioengineering, made by University of Pennsylvania researchers, are now paving a different way forward with a new kind of device: an “organ-on-a-chip.”

These small plastic chips contain microfluidic channels, carefully designed so that human cells can grow in them in a way that simulates the environments they would normally inhabit in the body. Different chips are tailored to mimic different organs.

Among them is a simulacrum of the human eye, complete with blinking eyelid, developed by a team of graduate students from the School of Engineering and Applied Science, Cassidy Blundell, Nicholas Perkons, and Jeongyun Seo.

They are making the case that their device represents a more reliable, accurate, and ethical alternative to animal testing.

The team recently presented their “eye-on-a-chip” to a team of experts from industry and academia as finalists in this year’s Collegiate Inventors Competition, which attracts submissions students who have developed potentially commercializable products in the course of research. 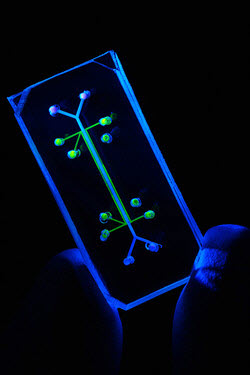 Dan Huh was part of the team that created the lung-on-a-chip. There, air and blood are pumped through separate channels, converging on either side of a layer of lung cells in the middle.Image courtesy of the University of Pennsylvania“Our eye-on-a-chip addresses one of the most critical issues in health research: a lack of effective preclinical models for disease modeling,” says Seo. “Our device has applications in many industries, ranging from pharmaceutical development to consumer product toxicity screening.”

Huh, along with Donald Ingber of Harvard’s Wyss Institute, received the Design Museum of London’s 2015 Design of the Year award for their lung-, gut- and liver-on-a-chip devices, but the eye-on-a-chip takes their work a step further. In addition to the channels and membranes that allow corneal cells to grow, the team’s eye-on-a-chip features a 3-D-printed, motor-driven eyelid that simulates blinking.

This additional layer of verisimilitude will be critical for accurately modeling dry eye disease, the team’s next project.

“It is rewarding to learn that innovation and paradigm-shifting potential of our organ-on-a-chip technology have been recognized by world-renowned inventors and scientists,” Huh says. “We want to demonstrate the possibility of leveraging microengineered physiological organ models to challenge a century-long tradition of using animals as human surrogates in life sciences.”