Apr 02, 2018Kavli Institute for the Physics and Mathematics of the Universe 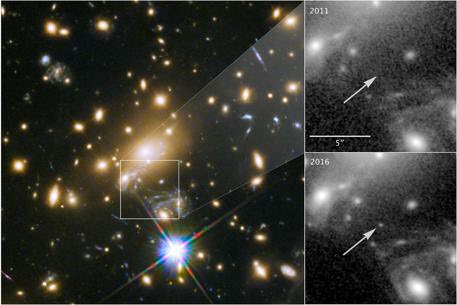 An Icarus capture by the Hubble Space Telescope. The left image shows galaxy cluster MACS J1149+2223 and the position of Icarus. The top right image shows how Icarus was not visible in 2011, and became visible in 2016.Image credit: NASA/ESA/P. KellyThe most distant individual star has been observed 9 billion light years from Earth, reports a new study in Nature Astronomy.

Most searches of objects deep in space require long time observations using telescopes. Galaxies are favorable targets because they are a collection of about 10 billion stars. However, individual stars are difficult to spot because of their faint light.

An international team of researchers, lead by Patrick Kelly, and including University of Tokyo School of Science assistant professor and Kavli Institute for the Physics and Mathematics of the Universe (IPMU) associate scientist Masamune Oguri, were able to discover this star, which they have named Icarus, because its brightness had been magnified by 2000 times by the gravity of a larger object in front of it.

While originally observing galaxy cluster MACS J1149+2223, five billion light years away, using the Hubble Space Telescope, the researchers noticed a flickering light in the background. Closer analysis revealed the light was not from a star exploding at the end of its life, but a blue star. In fact, the galaxy cluster's gravity had bent space-time to magnify the star's image, a phenomenon called gravitational lensing, where an object magnifies the light of objects directly behind it.

The discovery of Icarus is also important to researchers studying dark matter because its interaction with matter has a pronounced effect on the pattern of magnified stars. From the pattern of magnified stars in this study, the researchers were able to exclude the possibility that dark matter is made up mostly of a huge number of black holes with masses tens of times larger than the Sun.

It is expected many more magnified stars will be discovered when the upcoming James Webb Telescope becomes operational, and in doing so, they will be able to provide more insight into the properties of dark matter.