Synechococcus 7002 cells under typical light conditions (left) and under bright light for a long period of time (right). The cells on the right are much larger to accommodate additional cell-synthesis machinery required under high light-energy conditions.Image courtesy of mBioRICHLAND, Wash. – While relentless bright light brings many forms of cyanobacteria to their knees—figuratively, of course—Synechococcus sp. PCC 7002 does the opposite, thriving and growing at a rate that far outpaces most of its peers. That makes the organism, commonly called a form of blue-green algae, an attractive target for scientists and engineers trying to create better, less expensive biofuels or develop tools for churning out custom chemicals.

Now researchers have figured out why Synechococcus 7002 is so robust. The organism triples in size to accommodate a rapid expansion of the cellular machinery it uses to build proteins, the workhorses of cells. The organism flourishes under intense light by using the energy to keep growing.

The findings by scientists at the U.S. Department of Energy's Pacific Northwest National Laboratory, in collaboration with scientists from several other institutions, appeared July 26 in the online journal mBio.

Of sunlight and Synechococcus

Cyanobacteria capture the Sun's energy and use it to create food for themselves, all while drawing in carbon dioxide and giving off oxygen. The single-celled organisms have been on Earth for billions of years and play a critical role in Earth's climate. Scientists are trying to take advantage of these natural processes to create new forms of energy and sustainable bioproducts.

"These organisms are the major pathway for capturing solar energy and carbon dioxide on our planet," said PNNL scientist Alexander Beliaev, one of two corresponding authors.

When light comes in too fast and too intensely for most cyanobacteria, they slow their growth, using their resources instead to repair damaged cells. 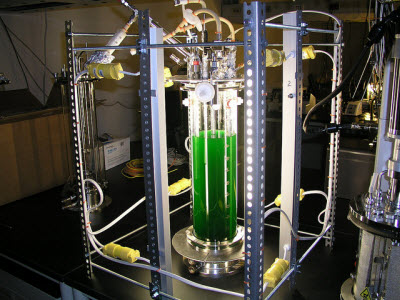 Synechococcus 7002 in a bioreactor.Photo courtesy of Pacific Northwest National LaboratoryBut Synechococcus sp. PCC 7002 is adept at using the extra light, doing chemistry on the fly and putting the extra energy to good use—toward rapid growth. The organism typically doubles in size in less than two hours, compared to other species which typically double between seven to 12 hours.

That may not sound like much. But if you start with a one-foot by one-foot plot of blue-green algae, after 48 hours the standard organism would cover the floor of a small office, while the fast-growth one would cover more than 600 football fields. That's an attractive difference for scientists trying to grow the organism as a source of fuel. The greater productivity means that more fuel and more chemical products could be produced more quickly compared to other systems.

"Everyone's question is: How can we make affordable fuels and chemicals faster? It's a critical choke point for renewable biofuel processes," said Hans Bernstein, also a corresponding author. Fuels made of biological materials—such as ethanol—currently make up a small slice of fuels used today, largely because they are more expensive than traditional fuels. The new research is one step toward making a wider range of biofuels less costly and more attractive.

The team led by Beliaev and Bernstein set out to understand the capability of Synechococcus sp. PCC 7002 for fast growth. They drew upon the resources of EMSL, the Environmental Molecular Sciences Laboratory—a Department of Energy user facility—to ferret out the molecular signals that underpin the organism's ability to stay productive even under bright light, using EMSL's capabilities to determine which genes were active.

Under bright light conditions where other cyanobacteria normally slow down, the team saw no hint of slowdown in the organism. Instead, the scientists demonstrated that the organism has the wherewithal to expand very rapidly, building molecular machinery quickly to convert light energy and carbon dioxide into new growth.

It's like a factory with the capability of expanding its assembly lines instantaneously to accommodate an increased flow of raw materials coming into the manufacturing area. If the electrons that provide energy aren't used immediately, they can get in the way and gunk up operations, but if they're put to good use, more of the desired product rolls off the lines quickly and efficiently.

"This organism responds to very high light levels by fixing carbon dioxide and upregulating machinery to make biomass," said Bernstein. "It's building proteins as fast as it can for rapid growth, and that requires additional space."

The team included scientists from PNNL, the Colorado School of Mines, Penn State, Montana State University, and Purdue. The work was funded by the Department of Energy Office of Science.