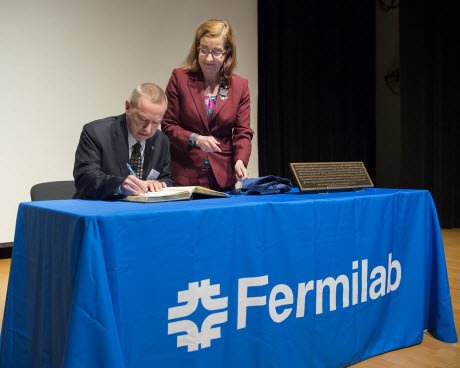 Fermilab Director Nigel Lockyer signs his name in the American Physical Society Register of Historic Sites while Laura Greene, vice president of the APS, looks on. Fermilab was officially designated an APS Historic Site in a ceremony on June 10, 2015 at the laboratory. Photo credit: FermilabIn a ceremony at the laboratory on June 10, Laura Greene, vice president of APS, presented Fermilab Director Nigel Lockyer with a plaque commemorating the lab’s official status as a Historic Site. The plaque reads, in part: “In recognition of Fermi National Accelerator Laboratory for its pivotal contributions to high-energy physics, including the discoveries of the bottom and top quarks and the tau neutrino, key components of the Standard Model.”

“We’re very pleased to receive this official status from the American Physical Society,” Lockyer said. “Fermilab’s bright future is built on a tradition of strong and important work, and it’s great to see that work recognized in this way.”

American Physical Society Historic Sites are chosen by the APS Historic Sites Committee with the goal of raising public awareness of physics and enlightening scientists about important events and places in their field.

“Fermilab has been the home of numerous significant scientific achievements, in addition to being an architecturally impressive facility,” Greene said. “I am truly honored that I will be presenting the plaque signifying Fermilab as an APS Historic Site.”

Fermilab was founded in 1967 under the leadership of its first director, Robert R. Wilson. The 6,800-acre site soon housed the iconic Wilson Hall and the Tevatron, a four-mile-around particle collider that was the laboratory’s flagship physics machine for 25 years.

In 1977, an experiment led by the laboratory’s second director, Leon M. Lederman, discovered the bottom quark, one of 12 known elementary particles that make up the fabric of the universe. In 1995, scientists on the CDF and DZero experiments discovered another of those elementary particles, the top quark. In 2000, scientists on a Fermilab experiment were the first to directly observe the tau neutrino, the long-theorized third type of this ghostly, mysterious particle.

Learn more about the history of Fermilab’s scientific achievements.

Fermilab scientists have been at the forefront of many other important discoveries, including that of the long-sought Higgs boson, found by the CMS and ATLAS collaborations on the Large Hadron Collider at CERN in Switzerland in 2012. More than 100 Fermilab scientists work on the CMS experiment at CERN, and the laboratory serves as the U.S. hub for that experiment, supporting roughly 1,000 university scientists. The LHC has just begun its second run, probing the unknown at the highest energies ever harnessed by mankind.

Fermilab’s current and future physics program includes experiments to unravel the mysteries of the neutrino over long and short distances, experiments to better understand the properties of particles called muons, and an effort to crack the enigma of dark energy, the force believed to be pushing the universe apart faster and faster. Fermilab is also involved in the hunt for the elusive dark matter, which makes up a quarter of our known universe.

The plaque presented to Fermilab today will be placed on display in Wilson Hall. The full text is as follows:

"In recognition of Fermi National Accelerator Laboratory (Fermilab) for its pivotal contributions to high-energy physics, including the discoveries of the bottom and top quarks and the tau neutrino, key components of the Standard Model. Honoring the achievements of Robert R. Wilson, who helped design and establish the lab in 1967 and served as its first director, and Nobel Laureate Leon M. Lederman, who served as its second director and helped inaugurate the Tevatron, the world's highest energy proton-antiproton collider with the pioneering use of superconducting magnets."