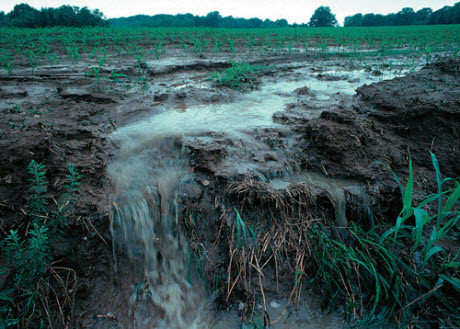 The findings are significant because agricultural runoff that leaches into drinking water wells can cause newborns to develop something called “blue baby syndrome,” a potentially fatal condition that reduces oxygen-flow in the blood. There are also serious environmental concerns because excess nitrogen, flowing into rivers and oceans, creates “dead zones” for fish and other marine life.

Related Article: How Much Fertilizer is Too Much for the Climate?

“A large portion of the nitrogen applied as fertilizer has remained unaccounted for the last several decades,” said Basu, a professor jointly appointed to the Faculties of Science and Engineering. “The fact that nitrogen is being stored in the soil means it can still be a source of elevated nitrate levels long after fertilizers are no longer being applied.”

Similar to phosphorus, nitrogen is a nutrient for plants and when applied as fertilizer helps increase crop yields. But to maximize these yields, an excess of fertilizer is often applied, leaving large amounts of nitrogen remaining in soil.

This nitrogen is easily converted to nitrate, a highly soluble, inorganic compound that has become the most common drinking water pollutant in the U.S. The issue has been controversial in Iowa, where, in an unprecedented, bold move, Iowa’s largest drinking water utility–the Des Moines Water Works–filed a lawsuit against three upstream rural counties for failing to address harmful surface-water nitrate levels that are more than twice the US federal drinking water standard.

The utility has been forced to invest millions in order to treat a drinking water supply that continues to receive unsafe, ever-increasing levels of nitrate.

Where does all the fertilizer go?

Since the 1970s, farmers and policymakers alike have worked hard to reduce the amount of fertilizer leaching from agricultural fields to groundwater and nearby lakes and streams. Yet in some rural areas, nitrate levels in groundwater have been found to be more than ten times the drinking water standard. 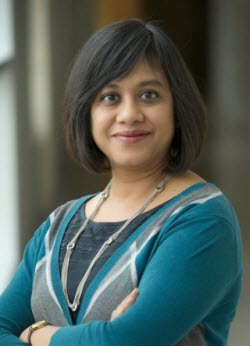 University of Waterloo professor Nandita Basu. Photo courtesy of the University of Waterloo“Public drinking water sources are vulnerable to receiving elevated nitrate,” says Basu. “But an even greater danger is for people in rural areas living on private well sources.”

To quantify the true extent of the nitrogen problem, numerous researchers have attempted to account for all of the nitrogen inputs to and outputs from watersheds around the world.  These so-called mass balance studies, however, have consistently come up short. Although we know that nitrate levels have been increasing in our waterways, the fate of much of the nitrogen that is applied to the land as fertilizer has remained a mystery.

Many scientists have suggested that this “missing nitrogen” must leave watersheds via denitrification, a reaction facilitated by microorganisms that transforms nitrate into the harmless nitrogen gas that makes up 78 per cent of our atmosphere.

Basu and her group, however, in their analysis of patterns in stream nitrate concentrations, saw evidence that nitrogen legacies could be present within the landscape.

“We began to ask the question, ‘Could nitrogen be accumulating in soils?’” says first author Van Meter, a doctoral student in the Department of Earth and Environmental Sciences in the Faculty of Science.

Basu and her group analyzed long-term data from over two thousand soil samples throughout the Mississippi River Basin, and found a systematic accumulation of nitrogen in agricultural soils. In many areas, this accumulation was not apparent in the upper 25 cm, the so-called plow layer. Indeed, these upper layers appeared to be depleted in nitrogen.

From 25 to 100 centimetres beneath the soil surface, however, they found significant accumulation, accounting for as much as 50 per cent of net nitrogen inputs.

“We hypothesize that this accumulation occurred not only because of the increased use of fertilizers, but also increases in soybean cultivation and changes in tillage practices over the past 80 years,” says Van Meter.

Their modeling results suggest that this nitrogen legacy could still be leaching into waterways more than three decades after nitrogen is no longer being applied to fields.

“The presence of this legacy nitrogen means it will take even longer for best management practices to have a measurable benefit,” says Basu, also a member of the Water Institute. “If we’re going to set policy goals, it’s critical we quantify nitrogen legacies and time lags in human impacted landscapes.”

Basu and other researchers at the University of Waterloo are currently exploring nitrogen legacies in the Grand River Watershed in Southern Ontario, as well as across North America and at a global scale.