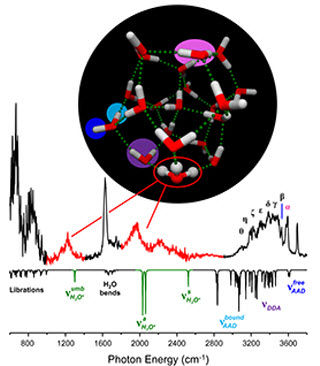 Vibrational spectrum of a single extra proton trapped on a cage formed by 21 water molecules. Bond groups highlighted in color are assigned as indicated in the calculated spectrum (inverted lower trace) for the structure shown in the inset.Image courtesy of: M.A. JohnsonResearchers at Yale University traced how a cluster of water molecules adapts to incorporate an extra proton, the positively charged subatomic particle, in the formation of an aqueous acid. Their spectroscopic “snapshot” and theoretical analysis of these data indicates that the extra proton resides on the surface of a cage structure formed by the 21 water molecules.

Electrically charged molecules or atoms, called ions, are the key species formed when salts (such as NaCl or table salt) or acids (such as acetic acid or vinegar) are dissolved in water. A useful way to understand how water is distorted to accommodate ions is to start with an ion isolated in the gas phase and then gather water molecules around them. In this way, spherical hydration shells form gradually as water molecules are sequentially added to yield “clusters,” which are tiny droplets that sequester the ion at the center. In favorable cases, the completion of a shell can be identified because the clusters containing the exact number of water molecules that close the structure are unusually abundant. These sizes are deemed “magic” because there are a “magic” number of molecules that fit together in an unusually stable structural arrangement. A famous example of this effect is the buckminsterfullerene “soccer ball” formed by 60 carbon atoms. When water molecules associate with a single proton, 21 water molecules form such a magic cluster, originally discovered by Chemistry Nobelist J.B. Fenn in 1974. This observation raised fundamental questions regarding the local, molecular nature of the positively charged species holding the proton and its location in the cluster. Researchers at Yale University now think that they have found the experimental evidence needed to answer these long-standing questions. Using a modern cryogenic radiofrequency ion trap, the scientists slowly cooled the protonated water clusters ions to almost absolute zero, allowing the nanocrystals to freeze into a well-defined shape for each size. In this regime, clear signatures of geometrical structures were observed in their vibrational spectra, which were obtained using recently developed infrared lasers that access the critical region of the spectrum. Theoretical analysis of these spectral patterns revealed that the key absorptions due to the excess proton arise from a hydronium ion, H3O+, which is incorporated into the surface of the cage created by the 21 water molecules, not held at the center of it! The signature vibrations lie far below values predicted earlier, and their locations directly encode the cooperative nature of proton hydration. The researchers now plan to continue gathering more evidence to see how the proton migrates through the water cage as the temperature is increased, thereby providing a microscopic picture of the positive charge transport mechanism operative in phenomena ranging from fuel cells to mammalian vision.

Partial funding for this work was provided by the U.S. Department of Energy, Office of Science, Office of Basic Energy Sciences, Chemical Sciences, Geosciences, and Biosciences Division. Funding was also provided by the Air Force Office of Scientific Research, the Department of Defense, National Defense Science and Engineering Graduate Fellowship, and the National Science Foundation funding for the Yale University Faculty of Arts and Sciences High Performance Computing Center.