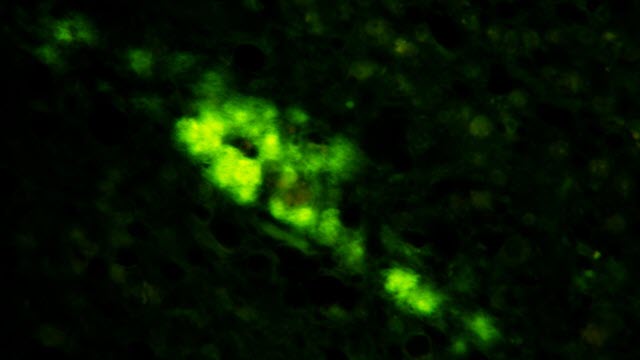 This is an image of synthetic human prions accumulating in the brain of humanized transgenic miceCredit: Case Western Reserve School of Medicine

Case Western Reserve University School of Medicine researchers have synthesized the first artificial human prion, a dramatic development in efforts to combat a devastating form of brain disease that has so far eluded treatment and a cure. The new findings are published in Nature Communications.

Prions are proteins that have folded incorrectly. They can bind to neighboring normal proteins in the brain, triggering a domino effect that causes microscopic holes, turning brains into sponge, resulting in progressive deterioration, dementia, and certain death. There are numerous types of prion diseases in humans; the most common being Creutzfeldt-Jakob disease (CJD). Why and how human prion misfolding occurs has been a mystery that the Case Western Reserve investigative team may have solved with its new findings.

"This accomplishment represents a watershed," said Jiri G. Safar, MD, professor of pathology and neurology at Case Western Reserve School of Medicine and the study's lead author. "Until now our understanding of prions in the brain has been limited. Being able to generate synthetic human prions in a test tube as we have done will enable us to achieve a much richer understanding of prion structure and replication. This is crucial for developing inhibitors of their replication and propagation throughout the brain, which is essential for halting prion-based brain disease."

Researchers already know how to make some forms of laboratory-rodent prions, but until now, none of these was infectious to humans as judged in experiments with humanized mice models. In their new paper, the researchers describe their success in synthesizing a new, highly destructive human prion from a genetically engineered human prion protein expressed in E. coli bacteria. They also discovered an essential cofactor known as Ganglioside GM1—a cell molecule which modulates cell-to-cell signaling—in triggering infectious replication and transmission of prion-based disease. This finding raises the hope for new therapeutic strategies using analog medications with inhibitory or blocking effect on human prion replication.

The researchers also demonstrated that the replication rate, infectivity, and targeting of specific brain structures by synthetic and naturally occurring prions is determined not by the presence of misfolded prions per se but by particular variations and modifications in the molecule's structure—specifically in an area known as the C terminal domain—which control the growth rate of infectious prions. "Our findings explain at the structural level the emergence of new human prions and provide a basis for understanding how seemingly subtle differences in mis-folded protein structure and modifications affect their transmissibility, cellular targeting, and thus manifestation in humans," said Safar.

Currently, there is no treatment or cure for CJD. Symptoms are similar to those of Alzheimer's disease, sometimes leading to mis-diagnosis. These include dementia, memory loss, trouble walking, and impaired vision. The occurrence of human prion diseases peaks at ages 60-65, accounting for approximately 1 in 10,000 deaths worldwide. Despite their relative rarity, human prion diseases have gained considerable notoriety and relevance because they display characteristics of neurodegenerative diseases but are infectious. Furthermore, they can spread not only between humans but also from animals to humans by an infectious agent that is highly resistant to inactivation.

Previous prion studies were carried out with laboratory nonhuman prions on mouse and hamster models. While this approach was useful for a general understanding of prion-triggered disease, human prions are different from these strains in both structure and mechanism of replication. Several recent therapeutic trials of human prion diseases have failed. Although these disappointing results may have occurred for multiple reasons, they demonstrate that the results from animal or cellular prion models do not automatically apply to human prions. Creating artificial human prions will allow researchers to engage in an apples-to-apples study process, opening the door to more complete insights into how prions unleash their destructive force, potentially resulting in medications that can stop the disease in its tracks. And since Parkinson's and Alzheimer's diseases spread through the brain in similar fashion as CJD, new inroads against these conditions are possible as well.

Safar was lead author of a pioneering paper on a "prion shape detector" published in Nature Medicine in 1998, which received extensive global coverage and has been highly quoted ever since. The current paper in Nature Communications is a continuation of this ground-breaking research.