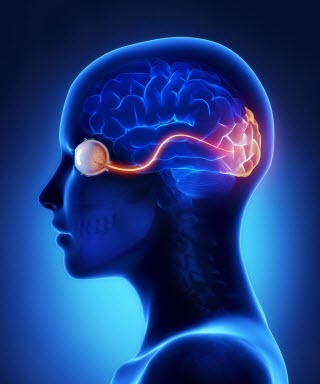 Experiments with mice could one day help blind people to see.Image credit: Cliparea/ShutterstockExperiments conducted under the leadership of a Stanford University School of Medicine investigator have succeeded, for the first time, in restoring multiple key aspects of vision in mammals.

In experiments in mice described in a study published online July 11 in Nature Neuroscience, the scientists coaxed optic-nerve cables, responsible for conveying visual information from the eye to the brain, into regenerating after they had been completely severed, and found that they could retrace their former routes and re-establish connections with the appropriate parts of the brain.

That unprecedented, if partial, restoration could pave the way to future work that enables blind people to see.

The animals’ condition prior to the scientists’ efforts to regrow the eye-to brain-connections resembled glaucoma, the second-leading cause of blindness after cataracts. Cataracts can often be surgically removed, but there’s no cure for glaucoma, said the study’s senior author, Andrew Huberman, PhD, an associate professor of neurobiology. Jung-Hwan Albert Lim, a graduate student at the University of California-San Diego, is the lead author.

The retina, a thin sheet of cells no more than half as thick as a credit card, is the light-sensing part of the eye. If nerve cells were offices, this tiny patch of tissue would be Manhattan. Photoreceptor cells in the back of the retina react to different wavelengths of light by sending electrically coded information to other cells in the retina called retinal ganglion cells, of which there are as many as 30 types, each specializing in processing a particular aspect of vision, such as upward motion, motion in general or the color red. The ganglion cells project long, electric-wire-like processes called axons, which extend down the optic nerve in a bundle and then fan out to numerous regions of the brain, where they connect with other nerve cells to inform them about the visual world.

“Somehow the brain can interpret these electrical signals to say, ‘Wow, that’s a fast-moving car coming my way—I’d better get back on the sidewalk,’” said Huberman.

“More than a third of the human brain is dedicated to the processing of visual information,” he said. “Over two dozen brain areas get direct signals from retinal ganglion cells. These areas are involved in not only what we typically think of as vision, but also circadian rhythms and mood.”

Retinal ganglion cells are the only nerve cells connecting the eye to the brain, said Huberman. “When those cells’ axons are severed, it’s like pulling the vision plug right out of the outlet,” he added.

When axons in the brain and spinal cord of a mammal such as a mouse or a human have been damaged, they don’t regenerate on their own. (The only known exception is olfactory sensory nerve cells.) The retina, too, is actually part of the brain, said Huberman. Damage to mammalian retinal ganglion cells’ axons spells permanent vision loss.

Mammalian axons located outside the central nervous system do regenerate, though. And during early development, brain and spinal-cord nerve cells abundantly sprout and send forth axons that somehow find their way through a thicket of intervening brain tissue to their distant targets. In a full-grown adult human, the axons snaking from retinal ganglion cells to one distant brain structure called the superior colliculus can reach six to eight inches in length.

While many factors are responsible for adult brain cells’ lack of regenerative capacity, one well-studied cause is the winding down, over time, of a growth-enhancing cascade of molecular interactions, known as the mTOR pathway, within these cells.

In the study, adult mice in which the optic nerve in one eye had been crushed were treated with either a regimen of intensive daily exposure to high-contrast visual stimulation, in the form of constant images of a moving black-and-white grid, or biochemical manipulations that kicked the mTOR pathway within their retinal ganglion cells back into high gear, or both. The mice were tested three weeks later for their ability to respond to certain visual stimuli, and their brains were examined to see if any axonal regrowth had occurred.

While either visual stimulation or mTOR-pathway reactivation produced some modest axonal regrowth from retinal ganglion cells in mice’s damaged eye, the regrowth extended only to the optic chiasm, where healthy axons exit the optic nerve and make their way to diverse brain structures. But when the two approaches were combined—and if the mouse’s undamaged eye was temporarily obstructed in order to encourage active use of the damaged eye—substantial numbers of axons grew beyond the optic chiasm and migrated to their appropriate destinations in the brain. 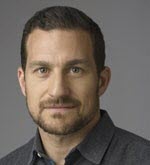 Andrew HubermanPhoto courtesy of Stanford University“Somehow these retinal ganglion cells’ axons retained their own GPS systems,” Huberman said. “They went to the right places, and they did not go to the wrong places.”

Tests of the mice’s vision indicated that visual input from the photoreceptor cells in their damaged eye was reaching retinal ganglion cells in the same eye and, crucially, being conveyed to appropriate downstream brain structures essential to processing that visual input. One test, for example, involved the projection of an expanding dark circle—analogous to a bird of prey’s approach—onto the visual field of the damaged eye. In response, most of the mice subjected to both mTOR-pathway upregulation and visual stimulation, as well as obstruction of their remaining good eye, did what they would be expected to do in the wild: They headed for the shelter of a “safety zone” in the experimental set-up.

In other words, the regenerating axons, having grown back to diverse brain structures, had established functional links with these targets. The mice’s once-blind eye could now see.

However, even mice whose behavior showed restored vision on some tests, including the one described above, failed other tests that probably required finer visual discrimination, said Huberman. He noted that the investigators could prove that axons from two specific retinal ganglion cell types had reached their targets, but lacked molecular labels that would have let them determine whether axons emanating from the rest of the other subtypes had done so. Further progress, he suggested, will depend on boosting total numbers of retinal ganglion cell axons that successfully extend back to and establish former contact with their target structures, as well as finding ways to engage and assess most or all of the roughly 30 subtypes of retinal ganglion cells.

The study was conducted in collaboration with researchers at UCSD, Harvard University, and Utah State University.

Funding for the study was provided by the National Eye Institute (grant R01 EY026100) and the Glaucoma Research Foundation.