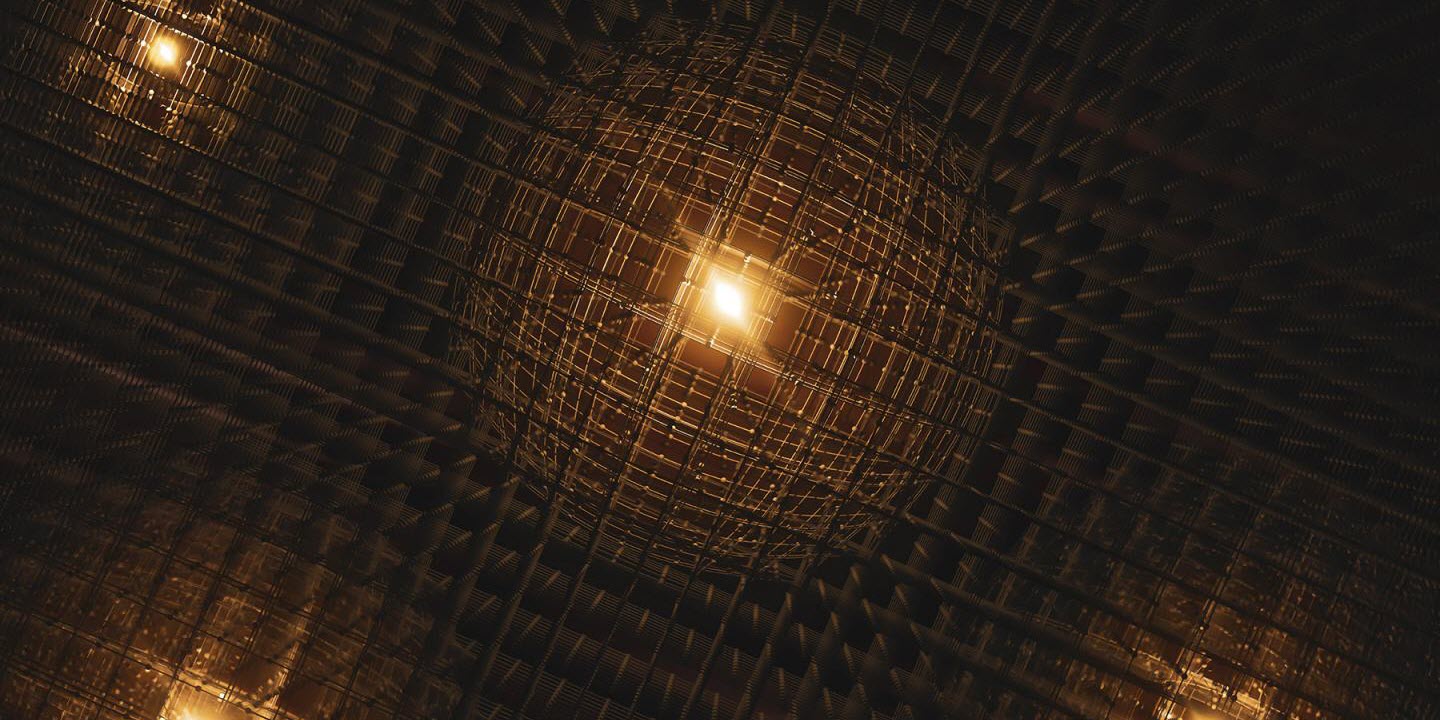 An illustration shows polarons—fleeting distortions in a material's atomic lattice—in a promising next-generation energy material, lead hybrid perovskite. Scientists at SLAC and Stanford observed for the first time how these "bubbles" of distortion form around charge carriers—electrons and holes that have been liberated by pulses of light—which are shown as bright spots here. This process may help explain why electrons travel so efficiently in these materials, leading to high solar cell performance.
Greg Stewart/SLAC National Accelerator Laboratory

Polarons are fleeting distortions in a material's atomic lattice that form around a moving electron in a few trillionths of a second, then quickly disappear. As ephemeral as they are, they affect a material's behavior, and may even be the reason that solar cells made with lead hybrid perovskites achieve extraordinarily high efficiencies in the lab.

Now scientists at the Department of Energy's SLAC National Accelerator Laboratory and Stanford University have used the lab's X-ray laser to watch and directly measure the formation of polarons for the first time. They reported their findings in Nature Materials on Jan. 4.

"These materials have taken the field of solar energy research by storm because of their high efficiencies and low cost, but people still argue about why they work," said Aaron Lindenberg, an investigator with the Stanford Institute for Materials and Energy Sciences (SIMES) at SLAC and associate professor at Stanford who led the research.

"The idea that polarons may be involved has been around for a number of years," he said. "But our experiments are the first to directly observe the formation of these local distortions, including their size, shape and how they evolve."

Exciting, complex and hard to understand

Perovskites are crystalline materials named after the mineral perovskite, which has a similar atomic structure. Scientists started to incorporate them into solar cells about a decade ago, and the efficiency of those cells at converting sunlight to energy has steadily increased, despite the fact that their perovskite components have a lot of defects that should inhibit the flow of current.

These materials are famously complex and hard to understand, Lindenberg said. While scientists find them exciting because they are both efficient and easy to make, raising the possibility that they could make solar cells cheaper than today's silicon cells, they are also highly unstable, break down when exposed to air and contain lead that has to be kept out of the environment.

Previous studies at SLAC have delved into the nature of perovskites with an "electron camera" or with X-ray beams. Among other things, they revealed that light whirls atoms around in perovskites, and they also measured the lifetimes of acoustic phonons—sound waves—that carry heat through the materials.

For this study, Lindenberg's team used the lab's Linac Coherent Light Source (LCLS), a powerful X-ray free-electron laser that can image materials in near-atomic detail and capture atomic motions occurring in millionths of a billionth of a second. They looked at single crystals of the material synthesized by Associate Professor Hemamala Karunadasa's group at Stanford.

They hit a small sample of the material with light from an optical laser and then used the X-ray laser to observe how the material responded over the course of tens of trillionths of a second.

"When you put a charge into a material by hitting it with light, like what happens in a solar cell, electrons are liberated, and those free electrons start to move around the material," said Burak Guzelturk, a scientist at DOE's Argonne National Laboratory who was a postdoctoral researcher at Stanford at the time of the experiments.

"Soon they are surrounded and engulfed by a sort of bubble of local distortion—the polaron—that travels along with them," he said. "Some people have argued that this 'bubble' protects electrons from scattering off defects in the material, and helps explain why they travel so efficiently to the solar cell's contact to flow out as electricity."

The hybrid perovskite lattice structure is flexible and soft—like "a strange combination of a solid and a liquid at the same time," as Lindenberg puts it—and this is what allows polarons to form and grow.

Their observations revealed that polaronic distortions start very small—on the scale of a few angstroms, about the spacing between atoms in a solid—and rapidly expand outward in all directions to a diameter of about 5 billionths of a meter, which is about a 50-fold increase. This nudges about 10 layers of atoms slightly outward within a roughly spherical area over the course of tens of picoseconds, or trillionths of a second.

"This distortion is actually quite large, something we had not known before," Lindenberg said. "That's something totally unexpected."

He added, "While this experiment shows as directly as possible that these objects really do exist, it doesn't show how they contribute to the efficiency of a solar cell. There's still further work to be done to understand how these processes affect the properties of these materials."

- This press release was originally published on the SLAC website. It has been edited for style