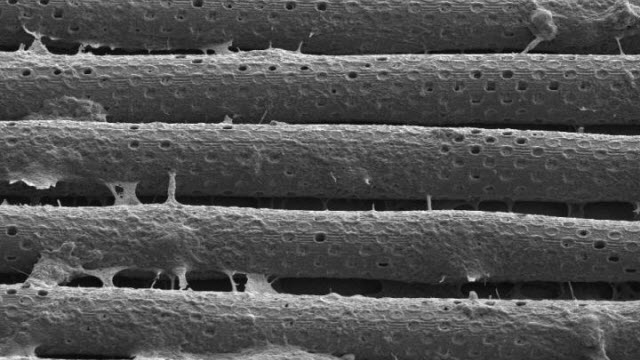 Researchers at IIT-Istituto Italiano di Tecnologia fabricated an artificial device reproducing a 1:1 scale model of the blood-brain barrier (BBB), the anatomical and functional structure that protects the central nervous system from external substances, such as contaminants, but also drugs when they are injected intravenously into the body. The device, which is a combination of artificial and biological components, will be fundamental for studying new therapeutic strategies to overcome blood-brain barrier and treat brain diseases, such as tumors.

The study was coordinated by Gianni Ciofani, a researcher at IIT in Pontedera (Pisa) and professor at Politecnico di Torino, in the framework of the research project SLaMM funded by the European Research Council (ERC) and aiming at developing new nanotechnologies for the treatment of brain diseases.

The device is described in a paper published today (Feb. 8) by the scientific journal Small and highlighted in the journal's inside cover: it is a microfluidic device that combines artificial components made with 3-D advanced microfabrication techniques (two-photon lithography) and biological ones, that is, endothelial cells (the cells covering blood vessels). 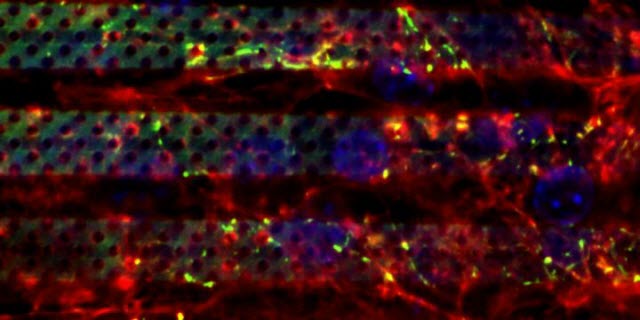 A confocal image of 3-D bio-hybrid microfluidic blood-brain barrier model: endothelial cells have been stained in blue for nuclei, in red for f-actin, in green for tight junctions.Image credit: IIT-Istituto Italiano di Tecnologia

The microprinting was realized with advanced 3-D printing technologies (Nanoscribe), that make use of a laser that scans through a liquid photopolymer and solidifies the material locally and layer by layer building complex 3D objects with submicron resolution. Using this manufacturing technique, researchers were able to engineer an accurate real-scale model of the BBB made from a photopolymer resin. Mimicking the brain microcapillaries, the model consists of a microfluidic system of 50 parallel cylindrical channels connected by junctions and featuring pores on the cylinder walls. Each of the tubular structures has a diameter of 10 μm and pores of 1 μm diameter uniformly distributed on all cylinders. After the fabrication of the complex scaffold-like polymer structure, endothelial cells were cultivated around the porous microcapillary system. Covering the 3D printed structure, the cells built a biological barrier resulting in a biohybrid system which resembles its natural model. The device is few millimeters in size and fluids can pass through it at the same pressure as blood in brain vessels.

The prototype has been developed owing to an extremely multidisciplinary approach, that was based on micro-nanofabrication competencies, modeling, and microfluidodynamics.

In the future, researchers will use the device to understand the interaction of drugs or of drug delivery nano-vectors to overcome the blood-brain barrier and target the central nervous system. The main goal is to find new therapeutic strategies for the treatment of brain cancer and brain diseases, such as Alzheimer's and multiple sclerosis.