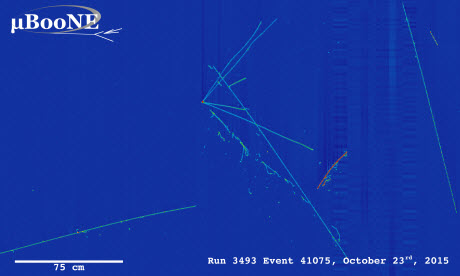 This display shows a neutrino event candidate in the MicroBooNE detector.Image credit: MicroBooNEThe recently commissioned MicroBooNE experiment at Fermi National Accelerator Laboratory has reached a major milestone: It detected its first neutrinos on Oct. 15, marking the beginning of detailed studies of these fundamental particles whose properties could be linked to dark matter, matter’s dominance over antimatter in the universe and the evolution of the entire cosmos since the Big Bang.

The MicroBooNE detector–a so-called time projection chamber filled with 170 tons of liquid argon–spotted neutrinos that were generated when proton beams from Fermilab’s accelerator complex slammed into a target a few hundred yards away from the detector.

Researchers from the Department of Energy’s SLAC National Accelerator Laboratory are developing tools for the acquisition of the experiment’s data and for the reconstruction of neutrino interactions with argon atoms from the raw data.

Neutrinos come in three different types that can change from one type into another. The phenomenon, called neutrino oscillation, shows that neutrinos have mass, and its discoverers were awarded the 2015 Nobel Prize in Physics. Over the next three years, MicroBooNE will search for additional sources of neutrino oscillation beyond those already known.

The experiment also serves as a test bed for the 500-times-more-sensitive Deep Underground Neutrino Experiment (DUNE), which will study the metamorphoses of neutrinos during an 800-mile journey through the Earth. DUNE will be constructed by a new international collaboration hosted at the Long-Baseline Neutrino Facility (LBNF) as the centerpiece of the particle physics program in the U.S.

“The observation of the first neutrino events in MicroBooNE is an important step toward testing whether our picture of neutrino oscillations is correct,” says Mark Convery, who directs SLAC’s LBNF/DUNE group. “SLAC is excited to be part of MicroBooNE, both for its immediate potential to discover new physics and for its importance in the development of liquid argon time projection chamber technology, which will be the key technology of DUNE.”