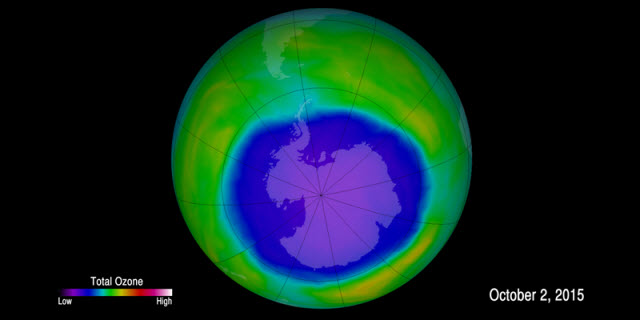 The average size of the ozone hole each September has shrunk by more than 1.7 million square miles since 2000.Image credit: NASA Goddard Space Flight Center

Scientists have observed clear signs that the hole in the Antarctic ozone layer is beginning to close.

The scientists from the University of Leeds were part of an international team, led by Professor Susan Solomon of the Massachusetts Institute of Technology.

The research confirmed the first signs of healing of the ozone layer, which shields life on Earth from the sun’s harmful ultraviolet rays.

Recovery of the hole has varied from year to year, due in part to the effects of volcanic eruptions.

But accounting for the effects of these eruptions allowed the team to show that the ozone hole is healing, and they see no reason why the ozone hole should not close permanently by the middle of this century.

These encouraging new findings, published June 30 in the journal Science, show that the average size of the ozone hole each September has shrunk by more than 1.7 million square miles since 2000—about 18 times the area of the United Kingdom.

The research attributes this improvement to the 1987 Montreal Protocol, which heralded a ban the use of chlorofluorocarbons (CFCs)—then widely used in cooling appliances and aerosol cans.

Professor Solomon said: “We can now be confident that the things we’ve done have put the planet on a path to heal.

"We decided collectively, as a world, ‘Let’s get rid of these molecules’. We got rid of them, and now we’re seeing the planet respond.”

Co-author Dr Ryan R Neely III, a lecturer in observational atmospheric science at the Leeds-based National Centre for Atmospheric Science and Leeds’ School of Earth and Environment, said: “Observations and computer models agree; healing of the Antarctic ozone has begun.

"We were also able to quantify the separate impacts of man-made pollutants, changes in temperature and winds, and volcanoes, on the size and magnitude of the Antarctic ozone hole.”

Leeds colleague and co-author Dr Anja Schmidt, an academic research fellow in volcanic impacts, said: “The Montreal Protocol is a true success story that provided a solution to a global environmental issue.”

She added that the team’s research had shed new light on the part played by recent volcanic eruptions—such as at Calbuco in Chile in 2015—in Antarctic ozone depletion.

“Despite the ozone layer recovering, there was a very large ozone hole in 2015,” she said.

“We were able to show that some recent, rather small volcanic eruptions slightly delayed the recovery of the ozone layer.

“That is because such eruptions are a sporadic source of tiny airborne particles that provide the necessary chemical conditions for the chlorine from CFCs introduced to the atmosphere to react efficiently with ozone in the atmosphere above Antarctica.

The ozone hole begins growing each year when the sun returns to the South Polar cap from August, and reaches its peak in October—which has traditionally been the main focus for research.

The researchers believed they would get a clearer picture of the effects of chlorine by looking earlier in the year in September, when cold winter temperatures still prevail and the ozone hole is opening up.

The team showed that as chlorine levels have decreased, the rate at which the hole opens up in September has slowed down.