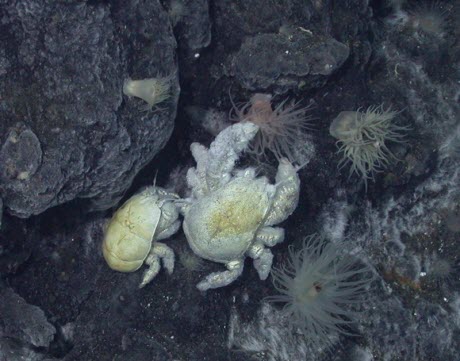 Kiwa tyleri belongs to an enigmatic group of squat lobsters, known as Kiwaidae, that thrive in the hot waters surrounding the geothermally heated hydrothermal vents. It is the dominant species at these sites occurring at extremely high densities, exceeding 700 specimens per square metre.

This Yeti Crab is famous for its body, which is densely covered by bristles - known as setae - and bacteria, giving it a fur-like appearance. Kiwa tyleri’s appearance allows it to harvest the dense bacterial mats, which overgrow the surfaces of vent chimneys, on which it depends on for food from the chemosynthetic bacteria.

For most of its life, Kiwa tyleri is trapped within the warm water environment of the vent chimney (up to about 25 degrees Celsius) and is unable move between vent sites because of the hostile, low temperature (about zero degrees Celsius), polar environment in between. Females carrying eggs only move away from vent chimneys, and into the surrounding polar deep-sea, in order to release their larvae; these would otherwise not survive the warmer temperatures of the adult habitat.

Crabs and lobsters, which are a characteristic of the global oceans, show an extremely low species number in polar seas. Hydrothermal vent systems found in the Southern Ocean, therefore, present a unique warm-water refuge to Yeti Crabs.

Dr Sven Thatje from the University of Southampton and lead author on the paper, says: “The Antarctic Yeti Crab is trapped in its warm-water hydrothermal vent site by the cold polar waters of the surrounding deep-sea. The species has adapted to this very limited sized habitat – of a few cubique metres in volume – by living in highly-packed densities and by relying on bacteria they grow on their fur-like setae for nutrition.”

The study is published in the journal PLOS ONE.