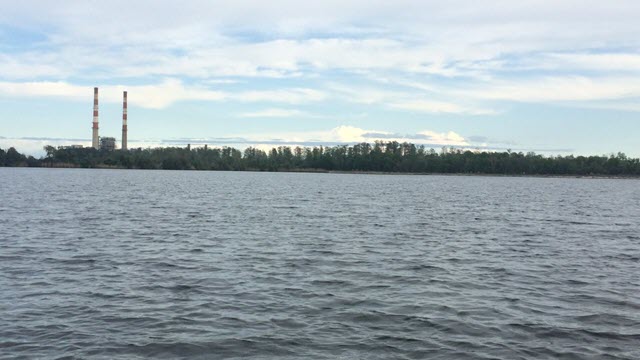 A Duke University study shows that trace elements in a fish's ear bones can be used to identify and track coal ash contamination in the waters where it lived.

"Calcified structures—or otoliths—found in a fish's inner ear are known to store a lot of life history information, including chemical and physical records of the fish's age, natal habitat and migration patterns," said Jessica Brandt, lead author of the paper and a 2018 PhD graduate of Duke's Nicholas School of the Environment. "We've shown that otoliths also capture the signatures of contaminants that have affected the fish's ecosystems."

"This shows otoliths can be used as biogenic tracers to assess the potential for ecological impacts of coal ash waste streams in affected waters," said Brandt, who is now a postdoctoral researcher with the U.S. Geological Survey. "While strontium behaves differently than the toxic elements in coal ash effluents, it helps us connect high levels of those elements back to the contamination source."

Strontium is a naturally occurring trace element in coal that retains unique isotopic ratios even after the coal is burned and coal ash comes into contact with an aquatic environment.

Past studies have used strontium isotope ratios to track coal ash's impacts on water quality, "but this is the first time we've been able to prove they can also be used as fingerprints to track coal ash's impacts in living organisms," said Avner Vengosh, professor of geochemistry and water quality at Duke's Nicholas School, who co-authored the study.

"This definitely shows the strontium in the fish must be from coal ash contamination," Vengosh said.

The researchers collected surface water and sediment-based pore water samples from two North Carolina lakes—Mayo Lake and Sutton Lake—that were historically impounded to provide cooling water for nearby power plants and to receive their effluents. Sutton Lake was the site of a large coal ash leak into the adjacent Cape Fear River after Hurricane Florence caused flooding this fall.

The researchers also collected surface and pore water samples from two sites located upstream from the lakes, and from two other lakes—Lake Tillery and Lake Waccamaw—that are not associated with coal ash waste streams. The samples were then analyzed in the laboratory, along with the otoliths of largemouth bass from each of the lakes.

"Strontium isotope ratios in the largemouth bass otoliths overlapped with ratios in corresponding sediment pore waters at all lakes and reservoirs, which is compelling evidence that otoliths can serve as biogenic tracers of coal ash effluents," said Richard Di Giulio, the Sally Kleberg Professor of Environmental Toxicology at Duke, who co-authored the study.

"This study's finding demonstrate that otolith studies can add to our existing research efforts," said Brandt. "Water-based strontium isotope tracers only give us information about coal ash impacts at a particular point in time, but because otoliths continuously grow over a fish's lifetime, we could use time-series analyses of otoliths to determine the timing of waste stream discharges or spills going back several years. This represents an emerging and important new direction in environmental toxicology and water-quality research."