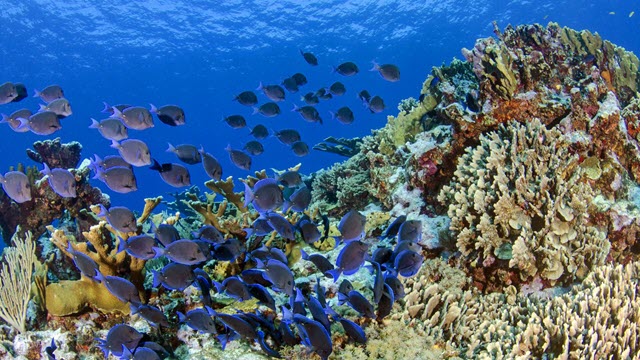 A large school of blue tang (Acanthurus coeruleus) grazes on a coral reef. Well-grazed reefs are more hospitable to baby corals than reefs blanketed with thick algae, and a recent study by Bigelow Laboratory scientists uncovered the importance of fish diversity to this processCREDIT: José Alejandro Alvarez

The health of coral reefs can be impacted as much by the diversity of fish that graze on them as by the amount of fish that do so, according to a new study by scientists at Bigelow Laboratory for Ocean Sciences. In the Science Advances paper, the researchers untangle and unveil the powerful effects that biodiversity has on Caribbean coral reefs.

"Scientists have long known that reefs are healthier when a large number, or a 'high biomass,' of plant-eating fish graze their surfaces," said Doug Rasher, senior author of the study and a senior research scientist at Bigelow Laboratory. "However, this study revealed that having a diverse portfolio of those fish species on the reef is equally important to keeping reefs well grazed and hospitable to baby corals."

The findings have significant implications for the management of tropical fisheries. Many herbivores, such as parrotfish and surgeonfish, are eaten by people across the Caribbean. Management plans often focus on sustaining a given number of herbivores on a reef, and not necessarily promoting species diversity within the herbivore community.

As these fish graze, they scrape tiny turf algae and seaweeds from the reef, keeping spaces free of algae and primed for the settlement of baby corals. This grazing is especially important following reef disturbances, such as hurricanes and coral bleaching events. In these decisive moments, considerable space on the reef suddenly becomes available. If seaweeds take hold, they prevent corals from re-establishing and can take over in their place. Shifts to seaweed beds are difficult to reverse and have become common in the Caribbean, where corals have declined on average by 80 percent over the last 40 years.

Scientists previously determined that different fish species favor consuming different algae. This means that diverse groups of herbivores keep algae at bay more effectively. However, these localized benefits of biodiversity have typically been studied on individual reefs, so it has been unclear whether such "biodiversity effects" are common throughout the ocean. To address this question, the research team studied 10 reefs spread across more than 1,000 kilometers of coastline in the Dominican Republic. By studying this vast area, they were able to quantify the influence of herbivore biomass and diversity across many reefs, as well as identify new biodiversity effects that might operate across the entire region.

"Looking at reefs in isolation is like studying individual pieces of the puzzle," said Rasher, who completed the analysis with Jon Lefcheck, a former postdoctoral scientist in his lab and the lead study author. "It is only by studying multiple reefs across an entire region that we could see the much larger role that biodiversity plays in supporting the process of grazing."

The fieldwork was carried out by Rasher in collaboration with Bob Steneck, scientist at University of Maine, and Ruben Torres, president of Reef Check Dominican Republic. Using remote underwater cameras, Rasher captured extensive video of fish grazing at each reef site. In these same places, the team measured the abundance of algae on the reef and how well the herbivores had trimmed it down. They also counted the number of baby corals present on the reef.

Back at the lab, Anne Innes-Gold, intern in the Research Experience for Undergraduates program at Bigelow Laboratory, analyzed the video footage to observe the amount, diversity, and sizes of the fish that had grazed the reef. Lefcheck then designed a statistical model to process the data and disentangle the impact of fish biomass and diversity on grazing. The model also enabled them to make more accurate comparisons among reefs by accounting for the influence of environmental differences that exist from site to site.

"Our research helps bring coral reefs in line with what we know from many other ecosystems - from seagrass beds to forests and grasslands," said Lefcheck, now Tennenbaum Coordinating Scientist for the Smithsonian's MarineGEO program. "It appears more and more likely that biodiversity is the lynchpin that holds nature together."

This study, which was funded by philanthropic gifts from Bigelow Laboratory donors, shows the importance of considering the influence of biodiversity at multiple spatial scales when studying an ecosystem or managing natural resources.

"Fisheries are typically managed at the level of country or region, not the reef," Rasher said. "This research shows that fostering fish diversity—both at the local and regional scale—is more important than we realized to the health of coral reefs."