Dams and fish have never been best friends. 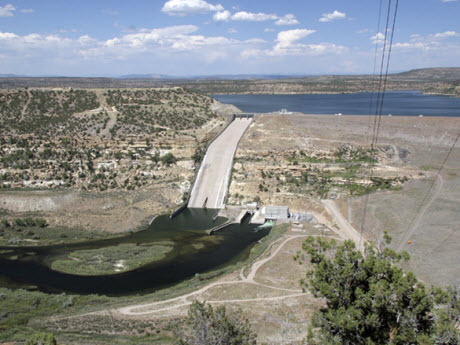 The San Juan River’s Navajo Dam and reservoir above.Photo credit: U.S. Bureau of ReclamationThousands of dams built along U.S. rivers and streams over the last century now provide electricity for homes, store water for agriculture, and support recreation for people. But they also have significant downstream impacts: They reduce the amount and change the timing of flowing water that fish rely on for spawning, feeding, and migration.

Recognizing that many large dams are here to stay, a University of Washington team is investigating an emerging solution to help achieve freshwater conservation goals by re-envisioning the ways in which water is released by dams. The hope is that “designer flows” downstream from dams can be tailored to meet the water needs of humans while simultaneously promoting the success of native fishes over undesirable invasive fish species.

The team’s approach is described in a paper appearing Dec. 18 in Nature Communications.

“Rapidly changing water availability demands new dam management strategies to deliver water downstream that balances human and ecosystem needs,” said senior author Julian Olden, a UW professor of aquatic and fishery sciences. “So, the question is whether designer flows can be engineered to meet human water demands, and take advantage of mismatches between native and nonnative species’ responses to flow to provide the greatest conservation benefit.”

The researchers examined the designer flow concept in the San Juan River, a major tributary to the Colorado River that flows through parts of Utah, Colorado, Arizona, and New Mexico. Every drop of water is significant in this arid landscape, and along the river’s roughly 380-mile length, the mighty 402-foot Navajo Dam is impossible to ignore. The river is home to at least eight native fish species, but over the years a number of invasive fish species have also taken up residence, including predatory channel catfish, red shiner, and common carp.

By integrating multiple decades’ worth of data about dam operations, river hydrology and fish species abundance into a multi-objective model, the researchers were able to identify specific water-release schedules that benefitted native fish over the invasive fish—while still ensuring that all of the domestic and agriculture needs that rely on the San Juan River’s water are met.

“We were also pleased to discover that our model predicts that the ecological benefits of designer flow releases do not evaporate during times of drought,” Olden said.

This method can guide water management in any river with large dams, Olden said. It’s particularly relevant in more arid regions of the American Southwest where water is at a premium, but major rivers like the Columbia or the Mississippi, which are similarly peppered with dams, also could have their dams programmed to release water in ways that aim to benefit both humans and freshwater ecosystems.

The key to the researchers’ approach is capitalizing on the fact that invasive fishes have only a recent evolutionary history in these river systems. Consequently, important life events of invasive fishes—such as spawning and habitat use—show slightly different relationships to patterns in streamflow compared with native fishes. The designer flows in their study exploited these small differences to identify dam releases during certain times of the year that would benefit native fishes and be detrimental to invasive fishes.

These tailored water releases are not trying to mimic the natural flow of a river before it was dammed, but rather emphasize the most important flow events for native fish in an altered river system, the researchers explained. According to their model, water releases in the San Juan River should occur in late winter, late summer and mid-autumn to get the best outcomes for native fishes over invasive ones. 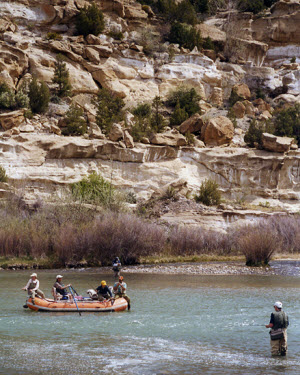 Fly fishers on the San Juan River below the Navajo Dam.U.S. Bureau of ReclamationWhile both designer and natural flows were predicted to be beneficial for native fishes, they found that designer flows could lead to double the loss of invasive fishes in the river, compared with a dam-release scenario that mimicked natural water flows, before the dam existed. Occasionally, dammed rivers will flush a deluge of water downstream, attempting to mimic natural river flows—but with mixed success for fish. This study suggests that such efforts could be better optimized.

This work is still in the modeling phase, and the researchers want to look next at how these water-release practices could potentially benefit other aspects of dammed river systems, such as restoring shoreline vegetation, benefiting aquatic insects, and even bolstering river recreation by manipulating the water releases to encourage formation of large sandbars. Ultimately, the researchers hope to test their designer flows in a real river system, in cooperation with dam operators, engineers, and water users.

“Let’s be honest: Carefully tweaking dam operations all year round to implement a designer flow regime would require a giant leap of faith, but anything new we do in water resource management involves some risk,” Olden said. “If we don’t try, we’ll never know how much better we actually could do.”

The paper’s lead author is William Chen, a recent graduate of the UW’s School of Aquatic and Fishery Sciences and the Quantitative Ecology and Resource Management Program.