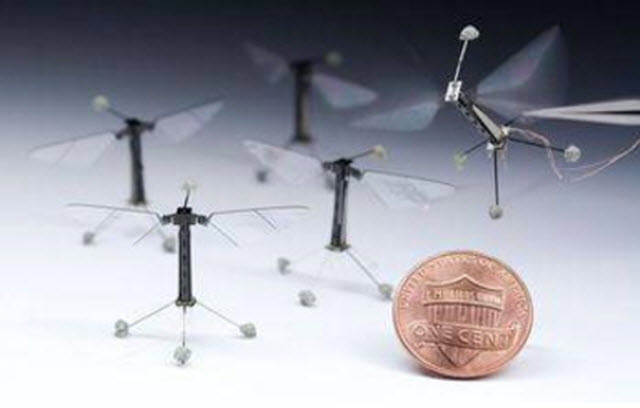 Inspired by the biology of a fly, with submillimeter-scale anatomy and two wafer-thin wings that flap almost invisibly, 120 times per second, the Robobee takes its first controlled flight. The culmination of a decade's work, RoboBees achieve vertical takeoff, hovering and steering.Photo Courtesy of: Kevin Ma and Pakpong Chirarattananon

Increasingly, researchers are designing robots with forms and functions that defy our expectation of what a machine can be or do.

Such robots could one day assist in reconnaissance, aid in remote communication, or even act as artificial pollinators. 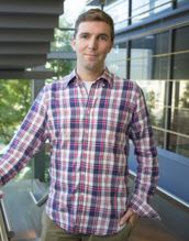 To do so required the team to advance basic research in a number of areas where they saw obstacles to realizing their vision: from micro-manufacturing methods and materials for actuation, to small-scale energy storage and algorithms to effectively control individuals and coordinated swarms of robots.

The group's research led to breakthroughs in each of these areas.

Highlights include new methods for manufacturing millimeter-scale devices based on lamination and folding; new sensors applicable to low-power and mobile computing applications; architectures for ultra-low power computing; and coordination algorithms for collections of hundreds or even thousands of robots to work together.

The team was inspired by nature—specifically the incredible ability of small insects to self-launch, navigate, and perform agile actions despite their small bodies.

"Bees and other social insects provide a fascinating model for engineered systems that can maneuver in unstructured environments, sense their surroundings, communicate and perform complex tasks as a collective full of relatively simple individuals," Wood said. "The RoboBees project grew out of this inspiration and has developed solutions to numerous fundamental challenges—challenges that are motivated by the small scale of the individual and large scale of the collective."

Today's RoboBee weighs only 84 milligrams—roughly the same size and even lighter than a real bee—and represents a model of successful interdisciplinary collaboration. Experts from neurobiology, evolutionary biology, materials science, computer science, electrical engineering, mechanical engineering, and bioengineering all worked together towards a common vision, with results that would be difficult to achieve with a smaller group.

While they were at it, the team created some eye-catching demonstrations, including, in 2012, the first controlled flight of an insect-scale robot.

Along the way, they have added new capabilities. The latest generation is able to swim, and they are working on RoboBees that can sense their environments using lasers.

In April 2016, the team presented work in Science that demonstrated that the RoboBee can perch during flight to save energy, as bats, birds, or butterflies do.

"The use of adhesives that are controllable without complex physical mechanisms, are low power, and can adhere to a large array of surfaces is perfect for robots that are agile yet have limited payload—like the RoboBee," Wood added. "When making robots the size of insects, simplicity and low power are always key constraints."

The researchers used an electrode patch that takes advantage of electrostatic adhesion to allow the RoboBees to stick to almost any surface, from glass to wood to a leaf. The patch requires about 1,000 times less power to perch than it does to hover, offering to dramatically extend the operational life of the robot.

"Aerial microrobots have enormous potential for large-scale sensor deployment to inaccessible, expansive, and dangerous locations. However, flight is energy-intensive, and the limitations of current energy storage technologies severely curtail in-air operations," said Jordan Berg, an NSF program director familiar with the project. "Because the capabilities of flying insects far exceed those of similarly sized machines, many researchers seek design inspiration from nature. NSF-funded projects such as this one show that innovative solutions can arise from exploiting a synergy between biological ends and engineered means."

The team has also generalized their insights for a range of projects beyond their core project.

The initial project was supported by an NSF 2009 Expeditions in Computing grant, which provided $10 million over five years to the interdisciplinary, multi-investigator research teams to fund transformative computing and information technology research.

In 2012, Wood received the Alan T. Waterman Award, which recognizes one outstanding young science or engineering researcher each year.

And in 2015, Wood and his collaborators received an NSF grant to work with Intel Corporation and develop aspects of the brain-inspired computing chips their team had developed for a range of other small, autonomous systems. The award is one of a handful made as part of the InTrans program, which allows researchers to mature and deploy successful research results in industries and to transition innovations into new technologies.

Meanwhile, research on the RoboBee continues. The team is currently working to make the perching mechanism omnidirectional, enabling the robot to land anywhere, and developing onboard power sources that could allow RoboBees to fly untethered.

Wood estimates it will take another five to 10 years before the RoboBee might be ready for use in the real world.

This type of research requires a high level of sustained, long-term investment—something at which NSF excels and which helped spur technologies like the Internet, Wi-Fi, and magnetic resonance imaging (MRI).

"The RoboBees project is a great example of the value of sustained support for basic research," Wood added. "Long-term investment in high-impact research pays tremendous dividends in terms of the technology fallout. We have experienced this time and time again with this project. NSF support is essential for projects like these and in general to keep the U.S. at the forefront of technology innovation."