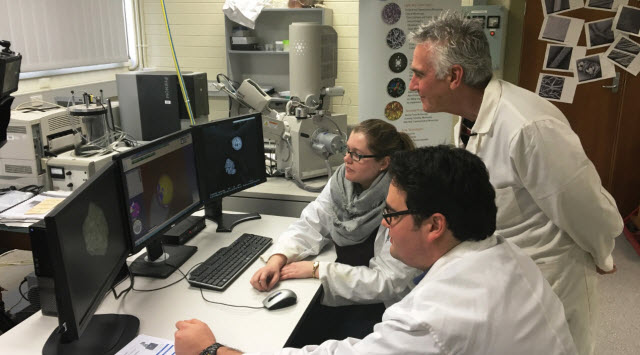 Professor Paul Kirkbride with his PhD students, Nick Lucas and Kelsey Seyfang, in their lab at Flinders.Photo Courtesy of: Flinders University

In a global game changer for gun crime, Flinders University forensic scientists have for the first time matched gunshot residue with specific brands of ammunition.

The ongoing research, which detects gunshot residue and then matches glass fragment trace elements and isotopes present with those in bullet cartridges, is already providing a previously unachievable level of detail about gun crimes – with more progress expected soon.

Related Article: Bullet Indicates Lawrence of Arabia Was No Liar

Because it is focused on .22 ammunition, the most commonly used ammunition in gun crimes in Australia, it has massive implications for Australian gun crime cases.

Flinders University’s Professor Paul Kirkbride, a former Assistant Director at Forensic Science SA and Chief Scientist at the Australian Federal Police who is leading the research, said it will be a game changer for law enforcement agencies who have previously been unable to link some suspects with crime scenes.

Professor Kirkbride has been working with PhD students, Nick Lucas and Kelsey Seyfang, and Flinders colleagues Associate Professor Rachel Popelka-Filcoff and Emeritus Professor Hilton Kobus on two separate projects; one to establish exactly how gunshot residues deposit on criminals, and the other to identify specific glass trace elements and isotopes and match them with ammunition.

The Flinders team has been using some of the most advanced technology in Australia, including Time of Flight Secondary Ion Mass Spectrometry, or ToF-SIMS, and a Sensitive High Resolution Ion Microprobe (SHRIMP).

They have been collaborating with SA Police, Forensic Science SA, ChemCentre WA, Dr John Denman from the University of South Australia’s Future Industries Institute, leading Australian technology developers Australian Scientific Instruments and Dr Charles Magee of Geoscience Australia, to take their analysis to a level of detail never seen before.

“We’ve shown matching characteristics in the trace elements and isotopes found in glass fragments in the residue left on the shooter, in the wound and in the specific batch or brand of ammunition,” said Professor Kirkbride. “This is like a fingerprint, which doesn’t change before, during or after the gun is fired.

“Eventually we hope to provide law enforcement agencies with the ability to identify not only the brand of ammunition, but also the location of manufacture and points of distribution, which all contribute significantly towards identifying the purchaser.”

The work, which is supported by a grant provided by the SA Department of State Development from the SA Premier’s Research and Industry Fund, will be unveiled to the forensic science community at an international conference in New Zealand in September.