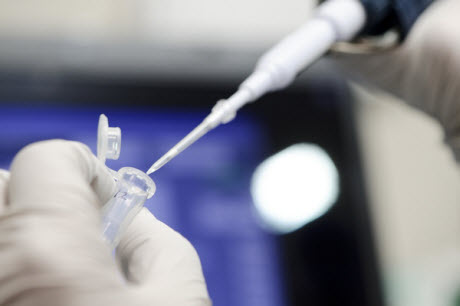 A researcher uses a micropipette to dispense a cell sample and analyze minute amounts of DNA in a science lab at the Influenza Research Institute at the University of Wisconsin-Madison.Photo credit: Jeff MillerVaccines to protect against an avian influenza pandemic as well as seasonal flu may be mass produced more quickly and efficiently using technology described today (Sept. 2) by researchers at the University of Wisconsin-Madison in the journal Nature Communications.

The new method for making flu vaccines using cell culture was devised using a type of research that has since been paused by the federal government, which is formulating regulations for how some viruses can be manipulated. The finding emphasizes the value of such research, says Yoshihiro Kawaoka, the professor of pathobiological sciences whose group performed the work.

Currently, most flu vaccines are manufactured using fertilized chicken eggs as crucibles to grow vaccine viruses — viruses that are a good match for anticipated seasonal or pandemic flu strains. Flu viruses are grown in the eggs, deactivated with chemicals, and purified to create the raw material for a vaccine.

However, because avian influenza can strike the flocks used to produce the millions of eggs required worldwide to make vaccines, serious outbreaks of avian flu could impede vaccine production.

New seasonal flu vaccines must be produced each year. Vaccines to protect against more worrisome potential pandemic strains of avian influenza are mass produced and stockpiled every few years based on surveillance of the ever-evolving strains of avian flu circulating in fowl worldwide.

Another key drawback to the use of chicken eggs is that the antigenic qualities of the vaccine virus, chosen to be as close a match as possible for an anticipated strain of flu, can change during incubation. The result is a less effective vaccine, such as the one widely used for the 2014-15 flu season, which was less effective due to changes in the circulating virus itself as well as antigenic changes to the vaccine virus propagated in eggs. Moreover, the new technology promises vaccines that do not pose a problem for those who are allergic to eggs. 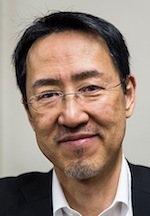 Yoshihiro KawaokaPhoto courtesy of the University of Wisconsin-MadisonThe new high-yield method was devised by Kawaoka's group before the federal government imposed a moratorium on such work in October 2014. Contributing significantly to the work was Jihui Ping, a research scientist in the UW-Madison School of Veterinary Medicine.

The new technology hinges on viruses engineered to replicate more efficiently in mammalian cells. By looking for genetic mutations that foster more efficient growth in cells and building those systematically into a backbone vaccine virus, the Wisconsin group was able to produce the high-yield vaccine viruses.

"We simply looked for strains that grow well in mammalian cells and picked those mutations that contribute to high yield," Kawaoka explains.

A patent for the new high-yield vaccine technology is being sought by the Wisconsin Alumni Research Foundation (WARF). Commercialization of the new method for making flu vaccines could help fuel a switch from egg-based vaccine production, according to Kawaoka.

The study was supported by grants from the National Institutes of Health; WARF; the Japanese Ministry of Education, Culture, Sports, Science and Technology; and the Bill & Melinda Gates Foundation.