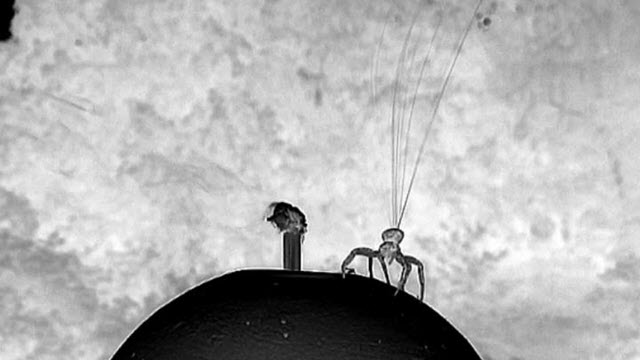 The crab spider spins out tens of fine silk fibers for its aerial dispersal. A triangular sheet of fibers is observed at the moment of the takeoffCredit: Moonsung Cho, Technical University of Berlin

Spiders take flight on the smallest of breezes by first sensing the wind, and then spinning out dozens of nanoscale fibers up to seven meters long, according to a study publishing June 14 in the open-access journal PLOS Biology by Moonsung Cho, Ingo Rechenberg, Peter Neubauer, and Christoph Fahrenson at the Technische Universität in Berlin. The study provides an unprecedentedly detailed look at the "ballooning" behavior that allows certain spiders to travel on the wind for hundreds of kilometers.

Many kinds of spiders engage in ballooning, either to disperse from their birth site, to search for food or mates, or to find new sites for colonization. While most ballooning spiders are juveniles or small adults, under 3 millimeters in length, some larger adults also balloon. Although the behavior has been studied before, these authors are the first to make detailed measurements of both the sensing behavior and the silk fibers that are used to catch the wind.

Through a combination of field observations and wind tunnel experiments, they found that large crab spiders (Xysticus species), about 5 mm long and weighing up to 25 milligrams, actively evaluated wind conditions by repeatedly raising one or both front legs and orienting to the wind direction. At wind speeds under 3.0 m/sec (7 mph), with relatively light updrafts, the spiders spun out multiple ballooning silks averaging 3 meters long, before releasing themselves from a separate silk line anchoring them to the blade of grass from which they launched. A single spider released up to 60 fibers, most of them as thin as 200 nanometers. These fibers differed from a drag line, which has been known as a ballooning line, and were produced by a separate silk gland.

The authors concluded that ballooning spiders actively sense wind characteristics and launch only when the wind speed and updraft are within relatively narrow ranges, increasing the odds of a productive flight. According to the fluid dynamic calculations the authors performed using their wind tunnel data, the spider relies on updrafts that form in the light winds into which they launch, further ensuring a successful flight.

"The pre-flight behaviors we observed suggest that crab spiders are evaluating meteorological conditions before their takeoff," Cho said. "Ballooning is likely not just a random launch into the wind, but one that occurs when conditions most favor a productive journey."