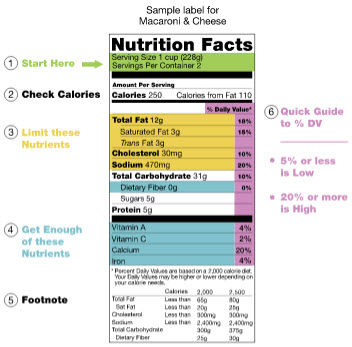 A sample nutrition facts label, with instructions from the U.S. Food and Drug Administration.Image credit: Trounce, Wikimedia CommonsThe labeling and in-store promotion of both healthy foods and healthier, low-sodium, low-fat, or lower-sugar-content food choices can increase sales of promoted food items, according to a study by researchers at Johns Hopkins University. The findings suggest an economically feasible model for promoting healthier food purchases and are published on the website of the Journal of Nutrition Education and Behavior.

“Many people, particularly those who live in low-income neighborhoods, have limited access to healthy foods. We wanted to develop an intervention that could help make healthy choices easier for consumers,” said Pamela Surkan, lead author of the study and assistant professor in the Department of International Health at the Bloomberg School of Public Health.

The Eat Right-Live Well campaign was developed and studied by a collaboration of researchers from the Bloomberg School of Public Health and the Carey Business School at Johns Hopkins University, and the Johns Hopkins Center for a Livable Future.

Related article: Not All Yogurts Are Created Equal, Nutritionist Says

For the study, researchers analyzed sales data from two supermarkets in low-income neighborhoods in Baltimore. One store implemented the Eat Right-Live Well campaign, which was designed to promote healthy food purchasing, while the other was used as a control for comparison. Investigators examined sales data over a three-year period both prior to and after the interventions were in place. The Eat Right-Live Well interventions included special signage and product labeling, employee training, nutrition education, community outreach, and in-store taste testing.

“Our study shows that the Eat Right-Live Well campaign can have a positive impact on a store’s bottom line, as well as the societal benefit of promoting healthier food choices,” said study author Kevin Frick, professor and Vice Dean for Education at the Carey Business School. “Cities or districts looking to entice new food retailers could offer incentives for businesses to provide labeling of healthy foods and complementary education.”

“The findings suggest that educational interventions like the Eat Right—Live Well campaign may have the potential to affect the purchasing practices of shoppers in low-income, inner-city neighborhoods,” added study co-author, Anne Palmer, director of the Food Communities and Public Health program at the Johns Hopkins Center for a Livable Future.

The research was supported by the Johns Hopkins Center for a Livable Future.