WASHINGTON, DC — April 20, 2021 — In 2009, music producer Phil Spector was convicted for the 2003 murder of actress Lana Clarkson, who was shot in the face from a very short distance. He was dressed in white clothes, but no bloodstains were found on his clothing—even though significant backward blood spatter occurred.

How could his clothing remain clean if he was the shooter? This real-life forensic puzzle inspired University of Illinois at Chicago and Iowa State University researchers to explore the fluid physics involved.

In Physics of Fluids, from AIP Publishing, the researchers present theoretical results revealing an interaction of the incoming vortex ring of propellant muzzle gases with backward blood spatter.

A detailed analytical theory of such turbulent self-similar vortex rings was given by this group in earlier work and is linked mathematically to the theory of quantum oscillators.

"In our previous work, we determined the physical mechanism of backward spatter as an inevitable instability triggered by acceleration of a denser fluid, blood, toward a lighter fluid, air," said Alexander Yarin, a distinguished professor at the University of Illinois at Chicago. "This is the so-called Rayleigh-Taylor instability, which is responsible for water dripping from a ceiling." 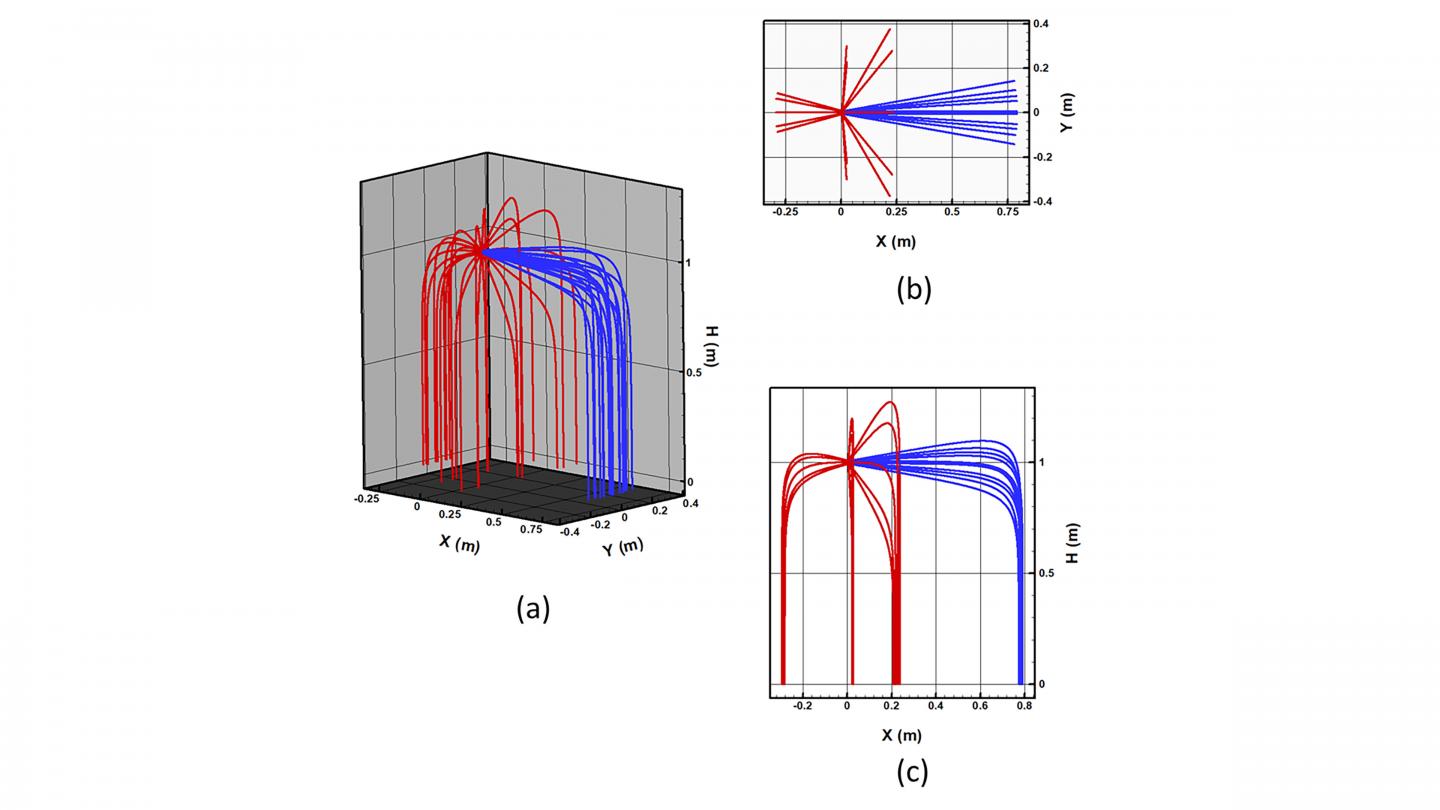 Scenarios for the trajectories of droplets at three different inclination angles, where the cases predicted with accounting for the interactions with the vortex ring are shown in red, and those without are shown in blue.
Gen Li, Nathaniel Sliefert, James B. Michael, and Alexander L. Yarin

Backward spatter droplets fly from the victim toward the shooter after being splashed by a penetrating bullet. So the researchers zeroed in on how these blood droplets interact with a turbulent vortex ring of muzzle gases moving from the shooter toward the victim.

They predict that backward blood spatter droplets can be entrained—incorporated and swept along within its flow—by the approaching turbulent vortex ring, even being turned around.

"This means that such droplets can even land behind the victim, along with the forward splatter being caused by a penetrated bullet," said Yarin. "With a certain position of the shooter relative to the victim, it is possible for the shooter's clothing to remain practically free of bloodstains."

The physical understanding reached in this work will be helpful in forensic analysis of cases such as that of Clarkson's murder.

"Presumably, many forensic puzzles of this type can be solved based on sound fluid mechanical principles," said Yarin.