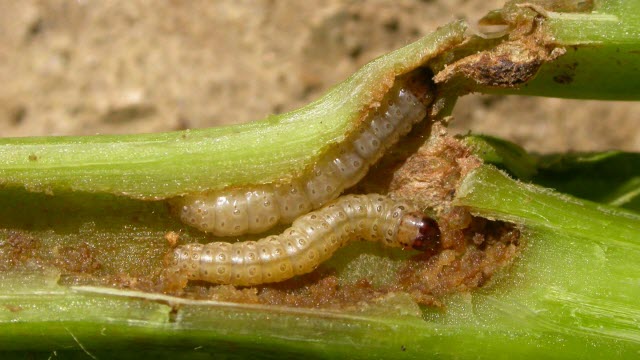 University of Maryland (UMD) researchers have pulled together 40 years of data to quantify the effects of Bt field corn, a highly marketed and successful genetically engineered technology, in a novel and large-scale collaborative study. Other studies have demonstrated the benefits of Bt corn or cotton adoption on pest management for pests like the European corn borer or cotton bollworm in corn or cotton itself, but this is the first study to look at the effects on other offsite crops in North America. By tracking European corn borer populations, this study shows significant decreases in adult moth activity, recommended spraying regimens, and overall crop damage in vegetable crops such as sweet corn, peppers, and green beans. These benefits have never before been documented and showcase Bt crops as a powerful tool to reduce pest populations regionally thereby benefitting other crops in the agricultural landscape.

Bt corn was first introduced and adopted in the United States in 1996 and is a genetically engineered crop (or GE) that makes up over 80 percent of our current corn plantings. In this study, Dr. Galen Dively, professor emeritus and integrated pest management consultant in the Department of Entomology, and Dr. Dilip Venugopal, UMD research associate, used data from 1976-2016 to look at trends 20 years before and 20 years after adoption of Bt corn. "Safety of Bt corn has been tested extensively and proven, but this study is about effectiveness of Bt corn as a pest management strategy, and particularly benefits for offsite crops or different crops in different areas than the Bt field corn itself," explains Venugopal.

"This is the first paper published showing offsite benefits to other host plants for a pest like the corn borer, which is a significant pest for many other crops like green beans and peppers," says Dively. "We are seeing really more than 90 percent suppression of the European corn borer population in our area for these crops, which is incredible."

Using numbers from pest traps to estimate the population and examine the recommended spraying regimens for pests like the European corn borer, Dively and Venugopal observed significant reductions in the population, with much less spraying occurring over time. "There would be no recommendation to spray for the corn borer given the current population, and this paper can trace that back to Bt corn adoption," said Dively. "What's more, by looking at the actual pest infestations and damage on actual crops over 40 years of data, we took it a step farther to see the benefits on all sorts of crops and the declines in the actual pest population. We are able to see the results in theory and in practice on actual crops and in the real pest population over a long stretch of time."

"The next steps would to be quantify the potentially millions of dollars in economic benefits we see here in a very concrete way to show money and time saved on spraying and pest management, crop damage reduction, as well as consideration of the environmental benefits. The important thing here, however, is to think of Bt crops as one of many tools in an integrated pest management tool box. The benefits are undeniable, but must always be weighed against many other options to use a broad range of tools and maximize benefit while minimizing any potential risks such as the pests developing Bt resistance," said Venugopal.

Dively concludes, "This study ultimately shows the importance of evaluating GE crops beyond the field that is being planted. These products and the new advances coming down the pipeline have the potential to suppress major pest populations just like Bt corn has. This is just the beginning, and we need to be quantifying these effects. I am excited by these results and encouraged for future work."

Their paper is published in the Proceedings of National Academy of Sciences.