New research by scientists at the University of British Columbia and BC Children’s Hospital finds that infants can be protected from getting asthma if they acquire four types of gut bacteria by three months of age. More than 300 families from across Canada participated in this research through the Canadian Healthy Infant Longitudinal Development (CHILD) Study.

“This research supports the hygiene hypothesis that we’re making our environment too clean. It shows that gut bacteria play a role in asthma, but it is early in life when the baby’s immune system is being established,” said the study’s co-lead researcher B. Brett Finlay, Peter Wall Distinguished Professor in the Michael Smith Laboratories and the departments of microbiology & immunology and biochemistry and molecular biology at UBC.

Asthma rates have increased dramatically since the 1950s and now affect up to 20 per cent of children in western countries. The discovery opens the door to developing probiotic treatments for infants that prevent asthma. The finding could also be used to develop a test for predicting which children are at risk of developing asthma. 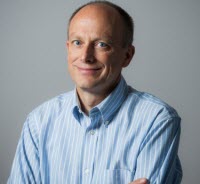 Brett FinlayPhoto courtesy of the University of British ColumbiaThe researchers analyzed fecal samples from 319 children involved in the CHILD Study. Analysis of the gut bacteria from the samples revealed lower levels of four specific gut bacteria in three-month-old infants who were at an increased risk for asthma.

Most babies naturally acquire these four bacteria, nicknamed FLVR (Faecalibacterium, Lachnospira, Veillonella, Rothia),from their environments, but some do not, either because of the circumstances of their birth or other factors.

The researchers confirmed these findings in mice and also discovered that newborn mice inoculated with the FLVR bacteria developed less severe asthma.

The researchers say that further study with a larger number of children is required to confirm these findings and reveal how these bacteria influence the development of asthma.

The study was published Sept. 30 in in Science Translational Medicine.