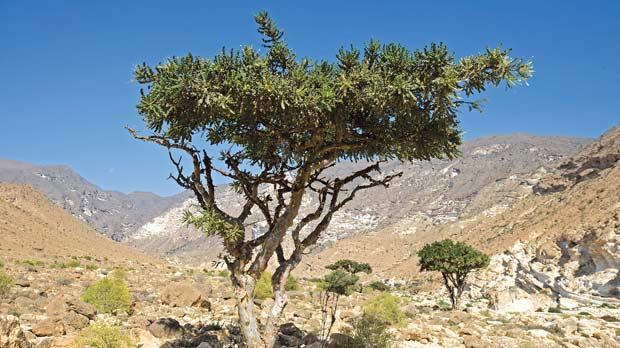 Frankinscense tree in Dhofar regionAFPAt this time of year it is hard to escape the Three Wise Men, riding their camels across Christmas cards and appearing in minature form in countless school nativity plays across the world, bearing their gifts for the infant Jesus. Whilst we are all familiar with gold, it is the mention of frankincense and myrrh that really says "Christmas" to us and and takes our imaginations back to ancient times. But you might be surprised to learn that these two fragrances are still big business today; for example, Ethiopia alone trades around 4000 tonnes of frankincense every year. This is all the more remarkable because a single tree from which the resin is harvested will typically yield about 200g per year. The main international trade comes from a tree called Boswellia papyrifera, and Ethiopia is the main exporting country.

Frankincense is harvested by wounding the bark of trees and collecting the resin that is subsequently released from the wound, a process known as tapping. Tapping is carried out at several spots along the stem, using a traditional type of tool that resembles a chisel. The procedure is repeated in 8 tapping rounds during the dry season, which lasts about 8 months. But high demand means that many trees are being over-exploited and populations are at risk of dying out, threatening the livelihoods of villagers who depend on them.

But help may be on hand as the results of a new study by botanists from Ethiopia and the Netherlands led by Motuma Tolera, which could secure a future for the trees by revealing the anatomy of the resin secretory system.

Motuma Tolera explains, "In some areas, the high demand for frankincense is causing over-tapping, which is bad for a couple of reasons. Tapping the tree creates wounds in the stem that take resources to be healed, and more wounds create more opportunities for insects to attack the tree. It's not a surprise that some trees die. This is bad for the tree but also for the people living in those areas, since they depend on the resin production, both economically and culturally.

"One of the problems is the lack of knowledge of the type, architecture and distribution of resin producing, storing and transporting structures in the tree. Such knowledge is needed for improved tapping techniques in the future."

The study, published this month in the Annals of Botany, provides this detailed knowledge for the first time.

Motuma Tolera said, "What we found was a 3-D network of inter-connected canals in the inner bark. Most of these canals are within a very narrow region of the inner bark, in a zone that is less than 7 millimeters thick. These allow for the transport of resin around the tree. We also found a few canals connecting deep into the xylem, the heart of the tree."

The findings will have practical applications for the people of Ethiopia and other frankincense producers. Traditional tapping starts with a shallow wound, from which a relatively small amount of resin is released. The wound is then re-opened later with a cut that goes a bit deeper and more resin is collected - a process that is repeated over and over again. The amount of resin collected peaks after about 5 rounds of tapping, which the study suggests is the point at which the wound reaches the main region of resin canals.

Motuma Tolera says, "Our results suggest that tapping can become more efficient. A cut that goes deeper, earlier in the tapping cycle, may drain the resin more effectively. Since the 3-D resin canal network may allow for long distance movement of resin when it is intact, this would be an option to reduce the number of cuts, and reduce the damage to the trees. New studies will be needed to show how such improvements may keep trees healthy but still productive for resin production. This opens new ways for a more sustainable frankincense production system."

"It's nice to discover something new, but here we also have the opportunity to give something back to the people who helped us with the study. I hope everyone in Lemlem Terara, but also elsewhere in Ethiopia, will benefit from what we have found in the future." Tolera says.

The team hope the results mean more Boswellia trees will live to see next Christmas.

How Temperate Rain Forests Can Aid the Fight against Climate Change

How Temperate Rain Forests Can Aid the Fight against Climate Change